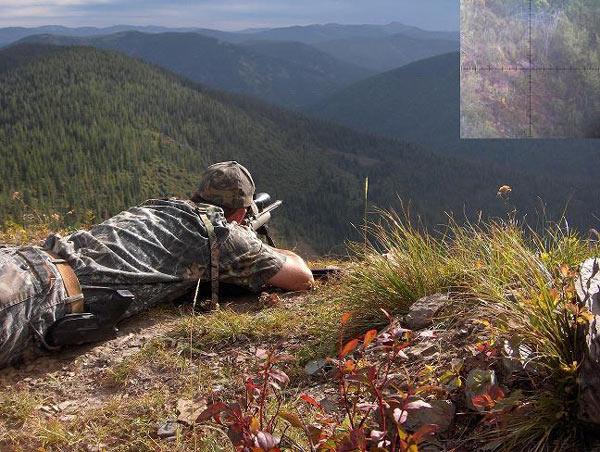 In recent years long range hunting has come into style. Remington was the first company to recognize this market and introduced the Sendero line. While the coupling of flat shooting high energy rounds and precision rifles is common place today, I find that many people are lacking in techniques for their use. The most common use of the purpose-built long range hunting rifle today seems to be, spot it, range it and shoot it. This style of hunting seems to be most common from a vehicle or ATV. Here in the northwest the long range hunting rifle has given the rifleman a way to hunt areas that were effectively un-huntable before.

In the early 90’s I hunted elk and whitetail deer in the Clearwater region of northern Idaho. It was about that time I discovered several locations where I could catch elk first thing in the morning out in open feeding areas. The second thing I discovered was that while I was a very good shot, I was not a long range rifleman. I quickly learned that I could not judge distance well enough for the task at hand and was sorely lacking in the proper equipment and techniques for my new hunting areas. After a very disappointing first year in these new areas I decided to do whatever I had to, to learn to hunt them effectively.

My first year attempt at longer range hunting was unique in my learning curve. I had in the summer taught myself how to range elk and deer based on their relative size using the scope reticule and the variable power selector ring. Having always been a number cruncher it occurred to me that one could also get a more precise hold over using the reticule and the power selector ring. So during the early part of elk season I spot a line of elk filtering out of a draw. I ranged the first cow using the reticule at max power and determine that the distance is about 450 yards. I looked on my spec sheet on the side of the scope and turn the power down to 5x, hold the tip of the fat part of the crosshair right behind the shoulder and squeeze off a shot. The .338 250 grain Partition impacted the elk within 4 or 5 inches of the point of aim. So now I am the king of long range shooting!

Late buck season a month later teaches me some humbling lessons. I miss no less than three 130 – 145 class bucks in as many days. The distances run from 300 to 450 yards. Now I doubt myself and start to chalk up the earlier elk shot to luck. I learn about scopes that shift their point of impact when the power selector ring is changed. I learn about elevation impact differences shooting a Browning BAR with a bipod. I also discover how your summer zero is affected when the temperature has dropped 60 degrees. I vow to be dialed in for next season.

It is the spring of my 3rd year that a timely event happened to me. I was selected from the Emergency Response Team at the county where I worked to attend scout / sniper school. I sold my beloved BAR the day I got back and purchased a Remington Sendero in 7mm Remington Mag. I topped the rifle with a Leupold 3.5-10x mil-dot tactical scope and was off to the races. That summer I also acquired a Ranging 1000 range finder. Now at the time I was absolutely setup. I practiced through the summer, and that fall using a combination of mil-dot ranging and the range finder anchored an elk at 625 yards with 1 shot.

Since those early days I have changed equipment, mostly upgrades in existing equipment. Laser range finders, better optics, more accurate rifles etc, but the base equipment stayed the same. The biggest change over the past 10 years of long range hunting for me has been the perfection of the long range ambush.
In the early years I used the techniques used by many today. Simply put, move through an area glassing for the long range game, spot it, setup and shoot. I found some serious disadvantages to this:

First and foremost analyze your equipment. Remington, Winchester, Savage, and Weatherby to name a few, all produce a long range hunting rifle.

Now we need to mount the appropriate optics for our needs. What optics a person needs for long range shooting is a hotly contested issue. Some feel that the long range shooter is best served with an optic of massive power say a 5.5-22x and the largest objective you can get, say 50-56 mm. I will lean toward the high magnification scope for extreme range shooting, but I believe that most shooters are better served by a different optic setup. My preference is a scope of variable power, with a low end of 3x or 4x and a top power of 10x-15x. If you’re low power is say 6x or 8x and you jump the “big one” at close range on the way to your ambush spot you can lose the animal from not being able to get on it. I learned this to the hard way. The size of the objective is also an issue, if you choose a larger objective for its’ light gathering capabilities that is great, but be sure to get an adjustable cheek piece to insure proper cheek weld. The last thing to choose is how you want to compensate for hold over correction.

Do you want to dial up a target knob or use a reticule hold over such as mil-dots? Calibrated reticules such as the one in a Shepard scope work very well if the rifle / load combo matches the scope calibration. Nominally graduated scopes such as the Horus Vision, Mil-Dot or the Nightforce NXS with NPR2 reticule work very well and are much more versatile. My personal preference is using the target knobs to dial a direct hold on the target. Using this method allows easy condition adjustment and a direct hold point. I also prefer a fairly course adjustment on the knobs. Knobs with 1 MOA adjustment for elevation and ½ MOA for windage are very fast and accurate for shooting out to 600 yards. Distances past 600 I prefer ¼ MOA clicks.

Now I take my new LR setup and head to the range. It is very important not to skip this step. I know people who have purchased a LR rifle, zeroed at 100 yards, ran some computer generated drop figures and headed to the field hunting. I just can’t even count the things that can go wrong between the two steps. Get some drop figures to get you close I use the exbal program and have had great results with it. Now zero your rifle at the distance you want to zero at. I like 200 yards and have run the drop chart with this zero in mind. Once you have established a zero at say 200 yards, place a target at 300 yards look to your drop chart and it will tell you to come up a certain distance in minutes of angle (if your program only gives inches you will have to convert) dial the elevation knob of your scope up the desired minutes of angle and shoot a group. Take notes (I keep a small spiral bound note book for this) about where the impact was and the size of group. I put this information right under the notes about the conditions I am shooting in. I repeat this at every 100 yards out to the distance I intend to shoot. Just because you zero for 200 then move out to 300 and the drop chart is right doesn’t mean that it will be on at 500 yards. Shoot all distances you intend to shoot.