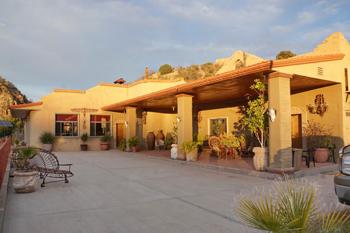 So fifteen years later, “El Diablo” returns to Mexico for a Coues deer hunt with Steven Ward of Wards Outfitters. I drove with my hunting equipment to the SHOT Show in Las Vegas and then down to Tucson, Arizona. I think the round trip was nearly 5,000 miles. I haven’t flown with hunting gear in well over ten years.

We four hunters all met up in Tucson near the airport and drove for an hour to the border in the outfitter’s vehicles. At the border we showed to the Mexican authorities our rifles and the paperwork we were required to prepare in advance of the trip.This took about 20 to 30 minutes and then we were on our way. The ranch is about 45 minutes from the border.

The final 30 minutes of driving was in an area that was both remote and picturesque. As we drove into the parking area I remember thinking, “This doesn’t look like a modest ranch house that I was expecting.” We were all surprised at the size and quality of the digs that would be our home for the next 5 days.

I would describe the accommodations as a specialty hotel/lodge associated with a working ranch. Quite luxurious, really. It was built in 2002 as a small, intimate specialty lodge targeted at weddings and other family gatherings. Our wives would have been quite comfortable there. The floors were all beautiful Mexican tile as were the walls in the large bathrooms.Sturdy built-in bunk beds with good mattresses were very comfortable. There was ample drawer storage and closets.

The main room was like the lounge area in a fine hotel with two separate seating areas furnished with comfortable leather couches and chairs.The fireplace was huge and magnificent. It burned warmly each morning and evening.

There was a large dining table but we did not eat there. Rather we walked about 100 feet to a separate building that amounted to an eat-in kitchen. Here we watched our Mexican cook prepare entirely authentic Mexican fare each morning and evening. For one meal, we feasted on hunter Zach Fallin’s game birds and elk meat that he brought with him.

I have a ridiculous sweet tooth and was initially disappointed that Magdalena the cook served no desserts even though that is a good thing for me! But I soon discovered the pancake syrup and a jar of strawberry jam up high on the pantry shelf. Since she cooked warm tortilla shells for each meal it was easy for me to feed the cookie monster in me by spreading some syrup or jam on the shells. By the third morning Magdalena had me figured out and the sweets containers magically appeared right in front of my spot at the table.

Our guides were outfitter Steven Ward himself plus Mike, Nick and Tanner. In talking with them it quickly became obvious that they were all passionate hunters and were also long range shooters themselves.

We would be hunting on 30,000 beautiful acres in grassy mountainous terrain dotted with mesquite, cholla and a few saguaro cactus. The river bottoms had many sycamore trees including some giants that I did not know even existed in nature. My hunt 15 years earlier was in an area further west and had only gentle hills. I like this new spot much better. The altitude of the ranch buildings was about 4,000 feet. The elevation gain was about 1,500 on some of the mountains we hunted but closer to 1,000 on most. The ranch road system had been augmented by the owner at Steven’s request when he started hunting this land last year.

Each morning we left after breakfast with plenty of light but just before actual sunrise. That’s a pleasant switch compared to our Wyoming hunts. On those we left camp 2 hours before first light and returned from one to two hours after last light. Steven explained that the full moon resulted in the deer feeding during the night and bedding down before dawn. But then they would get up from their beds shortly after good light and start moving again.

Each hunter went out with his own guide and two were in pickups and two were in four-seat Polaris Ranger ATV’s. I had not hunted from an ATV before but found it quite pleasant. It was also quite effective for glassing as we moved around the property. WIth either style of vehicle we would start the day in one spot out of the vehicle glassing from the ground and then move on depending on what we saw.

Usually we were glassing at distances just under a mile. Binoculars were effective much of the time especially if mounted on a tripod. But spotting scopes were essential to find the bedded bucks in many cases. For my next trip down here I will definitely bring a small folding stool.

LRH is going back to Mexico next year. Read about the 2017 hunt offering HERE.​
-Len Backus-​
All the guides were phenomenal game spotters. I saw between 10 and 15 bucks each day and in most instances the other three hunters did about as well in sightings on the same days. So collectively, we were seeing a ton of different bucks during the five days. Each day we did sort of a round robin approach to who was going where to hunt each day. I think everyone got to hunt all the spots that others had been to.
Next page: Hunt Report - 2016 LRH Group Coues Deer >