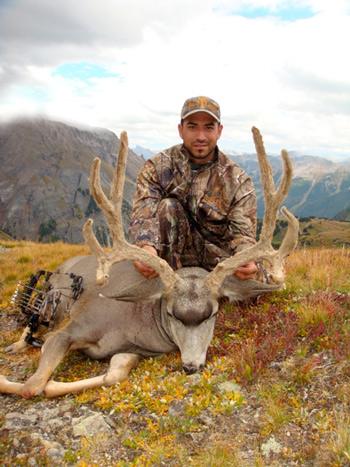 The tree line is a mile below. The scree fields are getting steeper and steeper as the shoot and forb fields are fading below. It’s so steep in fact that I had to strap my bow to my pack simply as a matter of survival! More than once I simply told myself, “This is not worth it. Back out and let him go for today or you could end up dying doing what you love…”

This Colorado velvet buck has deep forks and great symmetry.


I figure that sounds a little dramatic and maybe a touch over-emphasized but alas, I am not pulling your leg. Our high country Colorado hunt was filled with some of my best memories. Great friends, beautiful country and plentiful game; it doesn’t get much better.

Alisha and I left Southern California for our hunt the day before the opener. The drive went quickly and the mountain air was clean, crisp and refreshing. Arriving in the high country the next morning at 12,500 feet from sea level was a bit of a challenge and had both of us sucking wind while standing still!

It's often easier to approach mule deer bucks after they have bedded.


Looking through the 15x56 Swarovski binoculars mounted atop my Outdoorsmans tripod, I manipulated the pistol grip, searching the terrain above me. In the buckbrush 1,500 yards away were seven magnificent mule deer bucks feeding along the bottom of a huge basin spanning over a mile in width. The awesome sight took my breath away. Each buck was P&Y or better with the largest being a typical-framed four-point around 180”. To say I was charged-up would be an understatement. We hadn’t seen all the country we wanted to, so we left those alone and did a little basin jumping. Two hours later, we were in a new basin but since it was late morning, the bucks were bedded up. To my surprise we found them in the cliffs, bedded above the sheer talus slopes. I couldn’t believe it… I could only surmise that it may have been cooler or maybe there were fewer insects there to bother them. Nonetheless, these animals were acting more like sheep than deer. A total of 12 bucks revealed themselves to us and as it turned out, those 12 occupied the remaining nine days of my hunt.

The symmetrical 4x4 hung around with 12 other bucks including a big 3x3.


One buck in particular was a typical 4x4 that pushed 195” gross. He was tall and wide, with great tine length. His G-2s were 24” minimum and his rack was so massive atop his head we affectionately named him “Elk.” Well, Elk was of above average intelligence. He would buffer himself between others in the herd and lock up tight to sheer cliff walls that were all but impenetrable; hence my death defying acrobatics, stalking down sheer cut drainages trying to get to him. One day found me perched 200 yards above on a cliff with him 120 yards vertically below me. The talus was too loud for my boots and my wool socks slipped too easily over the small rocks. I had to go barefoot.

I only read a few print magazines these days. Western Hunter magazine is one of them. It is unique in that its articles are about hunting only in the western states that I love and seem to be drawn to about 10 times per year!

Two hours later, 110 yards down this steep 55-60 degree incline, 15 feet wide and towering 200 feet above me on each side, I was methodically calculating my next move. I had thought to myself that I could fall at any time or a rock could break free from above at any moment, making my stalk exceptionally precarious and nerve-racking. In the middle of a two-point balance, reaching with my right foot for the next hold, I felt the wind at my back! Just as quickly it started to hail and it didn’t relent for two hours. I sat there freezing in an inch of hail on this steep incline, watching Elk bust out, feeling dejected and I learned that day that even a big buck such as Elk is not worth that potential price.

The next several days included many close calls, but the summer storms always had the wind swirling and so many stalks were blown that I lost count. Eventually I was in a good position to get into bow range on Elk and as I closed in on him, I ranged his antler tips at 37 yards as they bobbed up and down while he fed. I rose up with an arrow nocked and came to full draw. He was quartered away and still unaware of my presence. I placed my pin on his vitals and released; the whole time I was thinking, “He’s a dead deer.” As luck would have it, the arrow deflected with a loud CRAAAACK off the rock outcropping in front of me 12 feet away. I could see Elk’s body and legs down to his hocks slightly downhill from my height of eye. However, upon release the arrow didn’t have clearance to make it over the rock! That silly mistake cost me big; yet another lesson learned to put away in the vault of knowledge. That was my last encounter with Elk as he shed his velvet the next day and left the high country for the vast stands of dark timber below.

The author shot his buck in the high country of Colorado.


On day nine, I was 148 miles and 28,000 vertical feet into my hunt. The Wilderness Athlete Hydrate and Recover absolutely saved my knees on this journey. I no longer had Elk to chase; he was long gone and the other bucks were shedding their velvet daily. There were still two shooters in the group hanging around and one of those happened to be the second largest buck on the mountain. He was a great typical with deep forks and great symmetry. It was time for me to try and do what I had gone there for. The wind was good that morning and stayed consistent. The bucks were bedding away from one another, which made closing the distance easier without all the eyes, ears and noses. I stalked with Micah on the camera close behind. We peered over a rock outcropping and found him bedded 29 yards away. That was the moment I had been working so diligently for. With the Gray Light Productions camera rolling, I came to full draw and settled my 30-yard pin on the spot and released. The shot felt good and we watched as the buck stotted off and over the bench. We eased up over the bench to get a look and watched him drop down to a bedded position and finally roll over.

I had many emotions going through me at that moment and I was elated with a high that was as grand as the mountains that surrounded me. What a buck! I walked up to him, let out a loud shout of joy, picked up his large set of velvet-covered antlers and felt his thick healthy coat with immense satisfaction. I sat there caping him out and de-boning the meat knowing that the journey was over. I packed him into my Badlands 2800 and with Micah’s help we packed him off the mountain. A successful kill always propagates emotions of sadness in me that the hunt is over, yet even more overwhelming emotions that I’ve been successful. I worked hard for this buck and I am proud of him. He represents my largest archery deer so far, hunted on public ground.

Glassing with high quality binoculars is the best way to find bucks above timberline.


I have been blessed with some of the greatest gifts a man could ask for. I am humbled to say the least and to anyone who has not chased open-ground, high country mule deer… it is everything you might be thinking and then some! It is one of the greatest hunts ever and I will continue doing it for as long as this life permits me to. So with the conclusion of this hunt, myself along with the rest of Gray Light’s friends, look forward to Kansas, California and Arizona to finish out our season.


Editor’s Note: Be sure to check out Marlon’s DVD. You can find it at his website – www.graylightproductions.com.