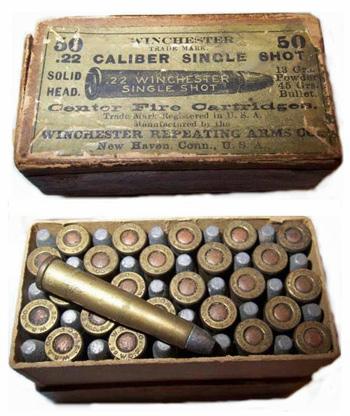 A quick glance at a 22 Hornet round is sufficient time to realize this cartridge has been around for a long time. The rimmed base and sloping shoulder angle offer two strong clues that denote its antiquity. Can this be the oldest center-fire varmint cartridge with ammo still available at the sporting goods store?

An old box of 22 WCF cartridges, note that they are very difficult to distinguish from 22 Hornets.


Curiosity was such that I decided to delve into the history of twenty-two caliber center-fire cartridges… and it turns out these varmint eradicators have been with us for a long, long time. And, by the way, the twenty-two center-fire was just about the only chambering for varmint rifles from the late 1800s until 1971 when Remington introduced the 17 Remington. There were a few other cartridges such as the 25-20 Winchester in the mix, but for many years the twenty-two caliber was considered by most hunters to be the ideal size for varmints.

22 Winchester, 1885 to 1936
It all started back in 1885 when Winchester offered varmint hunters the 22 Winchester cartridge (also called 22 Winchester Centerfire and 22 WCF). Black powder was used to drive the 45 grain, .228-inch diameter lead bullet at a velocity around 1550 feet per second. Although advertised as a 200 yard cartridge the effective range was only about 125 yards. When smokeless powder came on the scene Winchester adapted the 22 WCF to the cleaner powder but performance remained about the same. Ammunition for this classic was available at the local hardware store for over fifty years.

Besides its notoriety for being the first 22 caliber center-fire, the 22 WCF was also used by wildcatters in the 1920s to develop the 22 Hornet. In fact, those few that are reloading for the 22 WCF today generally use modified 22 Hornet brass. The major difference between the two is the bullet diameter; the Hornet measures either .223-inch or .224-inch and the 22 WCF ranged from .226 to .228-inch. When compared to the 22 Hornet the 22 WCF case length is shorter by only .0013-inch and the rim diameter is .008-inch less. There are other slight differences but these two cartridges are almost twins.

Factory ammo was last available for the 22 WCF in 1936 but anyone fortunate enough to have an old rifle chambered in the grandfather of varmint rounds can keep it alive by reloading ammo. The most difficult task will be to locate the proper size lead bullets or bullet mold. Since the bullets are a non-standard size a bullet mold may have to be custom-made, or perhaps an old, original mold could be located. RCBS carries a .225-inch mold which is used successfully by some 22 WCF owners.

Once a source for bullets has been located a set of 22 WCF loading dies can be purchased from CH-4D, and brass can be easily made from 22 Hornet cases. Donnelly, in “The Handloader’s Manual of Cartridge Conversions”, offers a simple method for making cases from Hornet brass. He suggests trimming the Hornet case to length, loading with 2 grains of Bullseye and corn meal, then fire-forming in a 22 WCF chamber. The final process is to clean the case and full-length size it.

One owner of a 22 WCF reports that ballistics comparable to the original loads can be had by using a 45 grain lead bullet and one of the following powders: 3.0 grains Hodgden Titegroup, 3.0 grains Alliant Red Dot, 3.5 grains Alliant Unique or 4.5 grains Accurate Arms #7. For a little more velocity powders such as Alliant 2400 and IMR 4227 will produce around 2000 feet per second. For those desiring to use black powder Cartridges of the World, 9th Edition, lists 13 grains of FFFg with a 45 grain lead bullet as a close match to the original load. However, using smokeless powder provides a cleaner load and very little smoke.

22 Savage HP, 1912 to date
The 22 Savage High Power (aka 22 Savage, 22 Hi Power and 22 ‘Imp’) was developed by Charles Newton and announced by Savage in 1912 for the Model 99 lever action rifle. The cartridge is based upon the .25-35 Winchester cartridge necked down to accept a .227-.228 inch diameter bullet. Surprisingly, this accurate, high velocity cartridge was not offered as a varmint round, rather as a cartridge for big game hunters. Popularity of the round was excellent for a while, until stories started circulating about hunters being maimed or killed after only wounding their dangerous prey with the small bullet. Interest in the 22 Savage had dropped significantly by the early 1920’s.

In Europe the story was somewhat different, where the cartridge was a popular chambering in drillings and combination guns. The cartridge carries the European designation of 5.6x52mmR and is still rather popular with hunters for small game like roe deer and fox. Several companies still manufacture ammunition for the European market, and export it to the United States.

Dies are available for the 22 Savage HP and are usually listed as 5.6x52mmR. Norma still makes brass and bullets under the European designation. Of course those into reloading can make their own cases using 25-35 Winchester or 30-30 Winchester brass and a set of form dies. Hornady offers a 70 grain spire point bullet and includes loading information in their reloading manual. Their recommended loads were developed using a modern Mauser 66 bolt action and the 70 grain bullet can reach a velocity of 3000 to 3100 feet per second. This is a maximum load and should be reduced by ten percent with lever actions.

Although not a considered a varmint round when brought to market, the fact that it was a twenty-two caliber was reason enough to include it in this list. It would be interesting to know what the status of this cartridge would have been had it been offered with a .224-inch bore and sold as a varmint round.
Next page: Grandpa's Varmint Rifles >