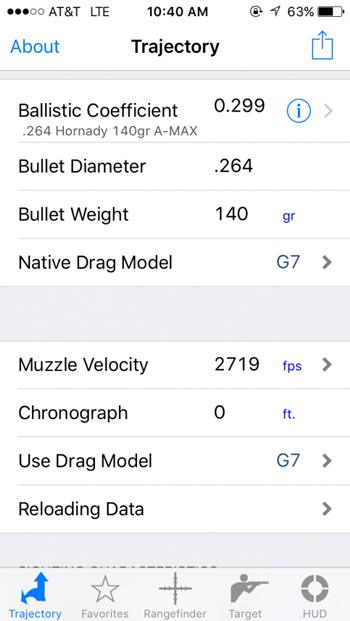 By Tyler Kee, The Truth About Guns

RF posed a question of the day asking about long range shooting. The responses were great, and it appears that a good portion of our readers are shooting out to the 1K line on a pretty regular basis. It warmed my heart to see a couple of our readers taking shots to way past that point. Personally, I’m a huge fan of long shots, and if I had to pick just one discipline, long range rifle shooting would absolutely be it. Part of my love of the sport has to do with the part RF hates the most; the math. And thanks to the proliferation of powerful smart phones, and a thriving app marketplace, there are calculators like Ballistic that can do the heavy lifting for you…

There are a lot of ballistic calculators out on the market, three of which I’ve spent a lot of time with over the last few months as I’ve been burning up TTAG’s money shooting various rifles chambered in 6.5 Creedmoor. There are a lot of app specific nuances, but the part that they all share is JBM’s engine for calculating where the bullet is going to go once it leaves the barrel. In the photo above, I’m shooting off a barrier at 100 yards [edit: I’ve been told I was shooting at roughly 70 yards] during this year’s Bushnell Brawl. Shortly after that stage, I headed over to a stage that required me to shoot my rifle at targets 537 yards away in a pretty stiff wind. Luckily, I’d captured the variables that the JBM engine needed, and I was able to put rounds on steel when I did my part in operating the rifle and reading the wind. I had similar experiences out to the 1000 yard line.

The app I used for that competition was Shooter. At $10, I consider it to be the gold standard when it comes to getting started on calculating where your bullet should go in a variety of conditions. However, Shooter has limitations. Namely, it lacks the ability to deal with variable wind conditions. The example of this that I love to cite is Nick’s experience on the Quanitico Shooting Club range he used to frequent. According to Nick, they have strategically planted trees so that the wind changes direction down the course, perhaps blowing left to right a the shooting line and switching to right to left by the time the bullet reaches the target. This is hard to account for and without a calculator that can deal with those variables, you’ll likely be forced to “walk” it in.

The feature that Ballistic has that really piqued my interest was its ability to account for that using JBM’s engine. This is done graphically and not through some sort of manual entry. More on that later. Additional features in the Ballistic app are a heads up display configured for your particular scope’s reticle. Ultimately, Ballistic is very graphically driven which can be both a blessing and a curse. Thankfully, Ballistic provides a very thorough video to cover the initial setup and configuration.

The first thing you’ll need to do is plug in your data for your rifle. As they discuss in their Quick Start video, Ballistic has ~5000 bullets in their library which you can plug into the calculator. They are separated by “bullet” which contains data from manufacturers, “loads” which is a database of factory loads (including velocity), and “Litz” which are the ballistic coefficients that respected ballistician, Bryan Litz has put together.

The next field is the muzzle velocity. You can use the data from the box of ammo which will likely get you close(ish), or you can use a chronograph. I use a MagnetoSpeed and for Ruger’s Precision Rifle in 6.5 Creedmoor, factory Hornady 140 gr. A-Max was giving me an average of 2719 fps. With that data in, the last fields to update are zero data including zero range, horizontal and vertical offset, and sight height. You can also input the atmospheric conditions present when you zeroed your rifle.

With that in, its time to start work on creating your ballistic solution for the problem at hand. To do that, you need to input your current atmospheric conditions. Ballistic has the ability to input information from the nearest weather station or you can manually enter this data if you happen to have it handy. Next up is wind. For the quick start portion of the video, they do a good job of using just the constant wind, but there’s more functionality available.