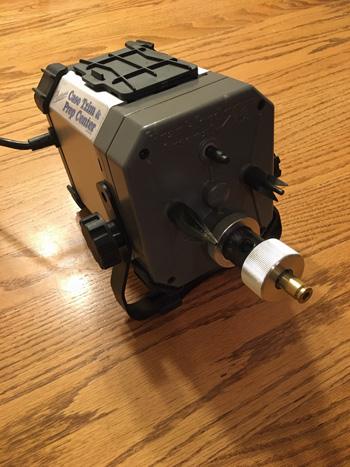 Trimming cases is my least favorite part of the reloading process. Traditional hand powered trimmers are slow to operate and take up a decent amount of space on my reloading bench for a tool that doesn’t need to be used every time a batch of brass is processed. Powered versions of the same trimmers can speed up the process but they still are bulky and I don’t care to pay for one considering how often I won’t use it.

Recently I’ve been exploring a new breed of trimmer that spaces off the case’s shoulder (instead of the head) and they appear to provide accurate trimming in a small package. However, most of these require individual collets for each cartridge family and the cost can rise pretty quickly depending on how many collets you need. The Frankford Arsenal Case Trim and Prep Center (CTPC) follows the trend of spacing off the shoulder but also serves other case prep functions and I was very excited to get the opportunity to do a hands on review.

The Frankford Arsenal CTPC is a motorized unit designed to allow users to trim and chamfer cases as well as clean primer pockets all with one piece of equipment. The CTPC comes with an inside chamfer tool (VLD), outside chamfer tool, small and large primer pocket cleaners and the case trimmer. The trimmer itself may appear a little different to some users because it spaces off the case shoulder instead of the case head, but the chamfering and primer pocket tools will look familiar to anyone who has used a motorized case prep center before. It should be noted that the design of this trimmer only allows the unit to trim bottleneck cartridges.

Since the CTPC uses the case shoulder as a datum it requires various collets and bushings to adapt to different cartridges the user plans on trimming. Frankford Arsenal has come up with a neat system that uses 6 shoulder bushings and 3 case body collets (See Figure 1) to accommodate almost every bottleneck cartridge a user is likely to trim from .17-.45 caliber.

Figure 1. A bushing (left) and collet (right) system allows the user to get a custom fit for almost any bottleneck cartridge when trimming.


To get ready for trimming, the user finds the shoulder bushing that seats roughly halfway down the shoulder of the case and then uses the smallest plastic collet the case will pass through to complete the system (See figure 2). All of these bushings and collets are conveniently stored in a storage compartment built into the unit (See Figure 3).

Figure 2. Proper sized bushing on a 243 Winchester case (right) next to another 243 case for reference.

Figure 3. Built in storage compartment for the bushings and collets.

For the review I had a friend give me over 100 pieces of 2x fired 243 Winchester brass that needed to be trimmed. Before trimming, all the brass was thoroughly cleaned using stainless steel tumbling media and allowed to dry completely. The proper bushing and collet were selected as mentioned in the previous paragraph. I then followed the instructions to get the trimmer set up.

The bushing and collet were both placed into the case holder assembly and the lock ring was tightened until the plastic collet held the body of the 243 with minimal wiggle. This assembly was then screwed into the unit using a CCW (left handed threads) rotation until the neck of the inserted shell lightly touched the trimmer head.

I then tightened down the second lock ring, pulled the case back out, turned the unit on and reinserted the case to trim it. After a few seconds the motor sounded like it no longer had a load on it and I pulled the case out of the holder assembly and touched it up on the chamfering tools. This first case ended up a little short, but with a few adjustments of the micrometer head my next piece of brass came out right where I wanted it.

To get more familiar with the trimmer, I chose to take a few pieces of brass and experiment with different trimming techniques to find out what was going to give me the best results. I found that pushing the case in too hard produced a big burr on the outside of the case neck that would take a long time to remove and made the machine sound like it was being overworked. Pushing the case in with fairly light but constant pressure created smaller burrs and gave me 3 cases in a row with measurements between 2.035-2.038 so I considered the machine ready to roll.

I ran 100 cases through the trimmer and fully deburred them as part of the process. Using light pressure and a ½ turn of the case at the end of trimming I was producing cases that were fairly easy to deburr and looked very nice. The best part was it only took me only 35 minutes to complete all 100 cases!

Next I measured all the trimmed cases and was a little surprised with the results. My minimum case length was 2.030”, maximum was 2.048” and average was 2.039” with a standard deviation of .005”. I found 34% of the cases were over my predetermined reject length of 2.040” and all of these long cases were trimmed again. After the second trimming, all but one of the retrimmed cases now measured less than 2.040”.

After this initial batch of brass I was not impressed with the trimmer. The results I got were worse than I expected and any time saved went out the window if I was going to have to retrim over 30% of my cases on every batch. I thought of possible causes of the inconsistent trimming and figured I might be using bad technique or maybe I had cases that had inconsistent shoulders. I didn’t have a shoulder gauge to measure the distance to the shoulder on the 243 cases so I decided to reevaluate the system again on another occasion.

For the second test I dug up some old 6.5 Creedmoor cases that I had recently retired after 15 firings. This brass had measured within .001” to the shoulder datum on the previous reload and I knew it could eliminate any inconsistencies due to differing head to shoulder lengths. Also, the CTPC cutter felt a little dull on my first test so I replaced it with the cutter out of my RCBS trimmer to see if that would help as well for the second test.

Setting up the machine for the Creedmoor cases took less than 5 minutes (including swapping out the cutter) and the initial trimming seemed easier with the new cutter installed and deburring was noticeably easier as well. Once my trim length was verified, I proceeded to trim 50 cases and measure them all at the end. The entire batch of cases varied by only .003” and 40 of them measured right on the money. Had this been my experience with my first test I would have been singing the praises of this machine from my rooftop for the whole neighborhood to hear. This second test provided everything I was hoping for when I received this machine for review-fast and accurate brass processing.

After my testing I looked up what people were saying about this unit on social media and web reviews at on online retailers. I found a mixed bag that basically mirrored my experience. Some users loved the trimmer and found it to be fast and consistent while others struggled to get accurate trim lengths and complained of dull cutters. I actually called Frankford Arsenal and had them send me a replacement cutter and the service was very fast but the second cutter wasn’t a whole lot better than the first.

My advice to anyone who has this unit and is not happy with it, is to replace the cutting head with one from a different maker and see if it makes a difference. Also, full-length resize your brass to try and make all the shoulder measurements consistent and I imagine your problems will be solved and you’ll be happy with the unit’s performance.

My final verdict is this: if I were looking to buy a case prep center this would go to the top of my list because for just a little bit more money than other units, you get an included case trimmer for any of your bottleneck cartridges. If I were just looking for a trimmer I’m not sure I’d buy it at full retail but if I found a good sale on one I would highly consider it. Also, it is important to remember that while this trimmer proved to be very easy and fast to use for bottleneck cases, it will not work for straight walled cases. So if you plan on trimming pistol cases this unit would not be of much use to you as a trimmer. However, it would still be excellent at helping you deburr cases trimmed by another unit.

About The Author:
Justin Hyer began reloading during high school and developed a passion for making precision shots that quickly blossomed into a love for long range shooting. He has spent his whole life living in the shadow of the Utah mountains and enjoys being minutes away from excellent shooting, hunting and fishing locations. He currently works as a product development engineer designing medical implants and instruments.

This review has helped me decide to purchase this prep centre, as l have 1500 rounds of 223 to trim to 222 length and the hand trimmer is way too slow.
i just ordered one and here it comes the rcbs cutter you replaced it with was it a carbide and is it the same carbide thats in my lyman??
You must log in or register to reply here.