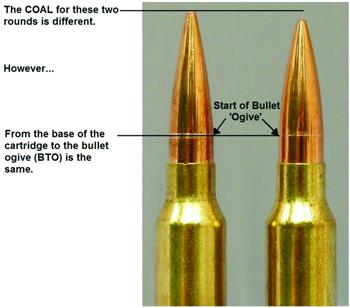 Cartridge Base To Ogive (CBTO)
The first half of this article focused on the importance of COAL in terms of SAAMI standards, magazine lengths, etc. There is another measure of length for loaded ammunition which is highly important to precision.

Figure 2. Chamber throat geometry showing the bullet jump to the rifling or lands.


Refer back to Figure 2. Suppose the bullet was seated out of the case to the point where the base of the bullet’s nose (ogive) just contacted the beginning of the riflings (the lands) when the bolt was closed. This bullet seating configuration is referred to as touching the lands, or touching the riflings and is a very important measurement to understand for precision handloading. Due to the complex dynamics of internal ballistics which happen in the blink of an eye, the distance a bullet moves out of the case before it engages the riflings is highly critical to precision potential. Therefore, in order to systematically optimize the precision of his handloads, it’s critically important that the precision handloader understands how to alter bullet seating depth in relation to the riflings.

Part of the required knowledge is understanding how to accurately and repeatably measure the Cartridge Base To Ogive (CBTO) dimension, and furthermore how to communicate this dimension to other shooters. The following material will shed some light on the subtleties, and pitfalls of the various methods available for measuring CBTO.

Why not use CBTO as a SAAMI standard?
If CBTO is so important to the precision capability of rifles, you might ask, “Why is it not listed as the SAAMI spec standard in addition to COAL?” There is one primary reason why it is not listed in the standard. This is the lack of uniformity in bullet nose shapes and measuring devices used to determine CBTO.

Figure 4. Two different bullet shapes, seated to the same CBTO length, but different COAL. Note the shiny scratches on the bullets made by the comparator tool which indicates a point on the bullet ogive near where the ogive will engage the riflings.


Let’s start by acknowledging the diversity of bullet nose shapes. All noses are essentially a curve that is part of a larger circle. You would think this would make nose shapes fairly consistent. The problem is that the circular arc geometries are different for each bullet design. Even for a given bullet design, tool making is not a precise enough process to make these shapes precisely the same from tool to tool. Add to this the challenge of putting this curve on a surface that is round (like a bullet). Doing this means that the size and location of the curve is influenced by the diameter of the bullet.

When your bullet seater touches the tip of one bullet, the distance to the point on the nose that engages the rifling is fixed. If your bullets have precisely the same nose curve and the same diameter, then your CBTO will be very uniform and should easily be able to maintain a +/- .001 tolerance. This is achieved when using good bullets, properly camfered case mouths, and a seater die that does not allow the bullet to bottom out (within the seater die cone) on the tip of the bullet.
Next page: Effects Of Cartridge Over All Length (COAL) And Cartridge Base To Ogive (CBTO) – Part 2 >
Reactions: durrelltn