A lot of "how-to's" on western hunting deal with the logistics of the hunt . Equipment, transportation, caliber choice, physical condition and so on are all very important considerations and without attention to these details the hunt could be one you would rather forget. Here the focus will be on sources to tap for relatively inexpensive hunts on private land.


How would it sound to gain access to 50 square miles of ranch for a couple of cases of soda pop and a couple of cases of beer?
​
Certainly the internet is a good place to look, as well as hunting publications. Even though they can supply the hunter with some good info they are not my number one choice. For me , the best all around source lies within each individual state, i.e., their game and fish departments. They are the mother lode of information for the DIY hunter. Just as a gold mine takes a lot of work to produce, so it goes with this source, a telephone will be your digging tool. A lot of time on the phone is the " work" part, but hey!, gas prices being what they are makes a good long distance phone plan a bargain. Before beginning to hack, pick, and pan I recommend getting notebooks and file folders together to organize your hard earned information. I regret all the sources I have lost over the years. 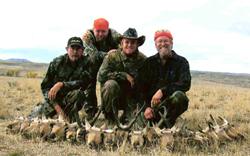 [/floatleft]Many western states maintain lists of landowners that are willing to allow trespass hunts. These are not usually available by accessing their websites; you must contact the G & F departments by phone. In many cases the lists are maintained at the district level and you must call the office that is appropriate for the region or unit you wish to hunt. They will mail you a list of these landowners and in some cases will email or fax them. Many on these lists allow free access to their land and even among those that charge the fee can be small. Remember the 50 square miles for beer and soda? That was an antelope hunt in Wyoming, a very successful one at that and the landowner only asked for one case of each, not two. Wanting to show my appreciation for being able to hunt there I upped the ante.

When contacting the persons on the lists if you let them know that you are willing to hunt after the first week of the season you can often improve your chances of getting permission. Once you have the landowner on the phone don't forget, they are a source for additional people to contact. In this way you can often obtain names of landowners that are not on any list yet are willing to allow trespass hunts. 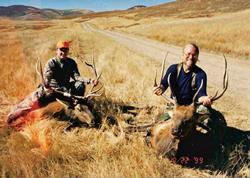 [/floatright]Those lists and the additional information gained by talking to those on the lists generally provide more than enough contacts to get you headed west. Yet there is another source within that same G&F dept., the wildlife biologists. Areas of trophy potential as well as herd numbers can be obtained along with more names of landowners. They have always impressed me with their willingness to help.


With the landowner lists and the wildlife biologists you will probably not have need to look further but there is another source if you do. The game wardens or wildlife officers as their preference may be can be a treasure trove of their own. They are out there daily and can provide some solid intel regarding the area you would like to hunt or perhaps even steer you away from some pre-conceived choice.

There has been only one instance where contact with a game warden was less than pleasant?. Truth is it was my fault in that instance. While speaking with a young lady wildlife officer her tone became increasingly agitated until she interrupted with "If you call me that again I'm going to hang up". Call you what?, was my reply. She then explained that she was not my "Dear". You see, I had been replying to information she was giving with responses like "Yes, dear" and "thank you, dear". Upon hearing her problem with me I promptly apologized and explained it was a southern upbringing induced habit. Habit being what it is I then just as promptly ruined my apology by ending with "I am truly sorry ...Dear. I didn't wait to hear what would have certainly been a very loud click. Should she read this I rephrase "Begging your pardon Ma'am". I must point out that even that contact produced another landowner name, one that allowed hunting free of charge.

At the end of a hunt you may find that you still have some time before you have to return, if so, use it! You have come a long way to be where you are and you can develop sources for future hunts without the long distance charges. Attend a community function if the opportunity presents itself. More places to hunt can be obtained in a single evening than you can use. I have used this to great advantage in the past but I must confess that the "community function" was a local watering hole. Not the kind with animal tracks around it either. A partner with good hearing is a vital resource at such gatherings. There you will hear things like "There must have been 500 head of elk move onto Mule Mountain day fore yesterday", and, "yeah, my buddy traps up there and he was angry cuz they are ruining his sets". Be careful with this source as you may become caught up in the festivities and not be able to get after them there elk till they are plumb over on Horse Mountain. 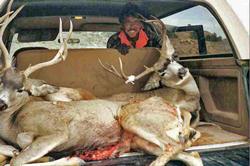 [/floatleft]On a final note I encourage anyone using these sources to ask the landowners you contact if they have a lesser price hunt if they are asking more than you can pay. A case in point: While discussing a trespass hunt with a rancher the conversation came to the "how much" part. "500 per person" was his answer. Explaining that my hunting buddies and I were common laborers and we could only pay $150 each I asked if he would consider letting us hunt for the lesser amount. "Why would I do that? I didn't do that for anyone else" he replied. My answer was "Maybe because they didn't ask". A long silence ensued and then he responded. "Alright then, but the wife's gonna kill me".


*******************​
Jim is a semi-retired landscape contractor and former naval petty officer. He has been reloading, shooting and hunting out west for 35 years. He competes in benchrest and f-class. Jim also has been making custom forged and stock removal knives for 15 years with some featured in knife magazines.