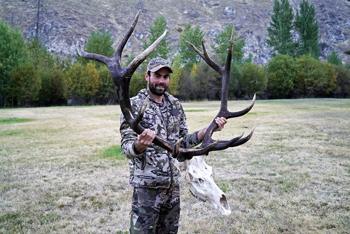 Give it a try; it’s easier than you think

When the hunt is over and the meat has long been consumed, I like to look at the antlers on my wall and remember the hunt, the struggle, the good times, and the excitement. Obviously, it’s not practical to do a mount on all your animals, so for many, I really like the look of a European or skull mount; it makes for a great display.

In the past, I’ve taken elk and deer to the taxidermist and paid to have the skulls cleaned and bleached. This can range anywhere from $100 to as much as $300, depending on where you are. Although cheaper and easier to find a place for than a shoulder mount, the cost still adds up.

Quite a while back, I decided to get the necessary tools and start boiling my own skulls. Through trial and error, I’ve found an easy way to make a quality Euro mount at a very low cost. The task seems daunting at first, but once you do a few, it gets easier. Plus, it’s rewarding doing it yourself.


Once you have everything, the cost per skull is around $2 per skull including propane, baking soda, bleaching material, and super glue. This can be less by getting a larger pot and doing more skulls at once.

If you want to get the cost way down or do it near where you are hunting, bring your tub and boil the water over a wood fire. I’ve boiled out many skulls while traveling by just building a fire and boiling in a pot.

Step 1: Skull Prep
After gathering the necessary materials, start by prepping the skull. If you haven’t already, remove the hide and bottom jaw. Also remove the ivories on elk before boiling.

Once you have the bottom jaw separated, remove the eyes and most of the brain material. Removing the brains before boiling makes it easier in the long run. Don’t worry about trimming any muscle off, because the large pieces tend to come off easier during the boil.

To remove the brain, start by using a stick, coat hanger or long screwdriver to break it up into small pieces that can fit out the back of the skull. Then take a hose with a spray nozzle and flush the pieces out. If any remains, repeat until done.

Note: Some people allow the skull to rot before boiling to cut down boil time as a form of prep. I don’t, because it’s harder to work with and it stinks. I prefer to boil fresh skulls. The baking soda works at cutting the boil time down and keeps everything from smelling horrible. Plus I got blood poisoning accidentally from a rotten skull, so I tend to avoid it.

Step 2: Prepare the Pot
Fill the pot with water about halfway and then start the burner. Before adding the skull, pour the baking soda in and stir. I use about 7 oz. of baking soda (1 cup) for a 9 to 12-gallon tub. It isn’t exact, but I generally keep it around that one cup. If you have a larger pot, you can adjust accordingly. For a smaller pot, you’ll definitely want to reduce the amount, as too much will dry the skull out and can make the bone rough.

Check the skull periodically, as over-boiling can cause the skull to crack. The key is to find the time where the meat and fat falls off easily, but not so long that all the teeth come out or the skull falls apart. When the meat falls off the bone, you’ll know it’s done.

Keep the water at a low simmer. A fast, hot boil will make the bone more susceptible to falling apart. I treat it like I’m slow-cooking meat on the bone - low and slow. Once the meat falls off, remove the skull for cleaning.

Step 4: Clean the Skull
Note: Cleaning the skull is easiest while the skull is freshly boiled. If you can’t get to it immediately, leave the skull in the water until you can finish it. Before you plan to clean it, heat the water and skull for 20 or 30 minutes and then remove it and clean.

Remove the skull from the water. It’s important that everything “not bone” is removed from the skull. Inspect the skull for any missing pieces or teeth that may have been boiled off. If there are, you can fish them out later.

Start by pulling off whatever large pieces of meat remain. The pieces should come off easily. Once that’s done, use the hose and spray nozzle to flush out excess pieces of muscle and fat.
Also, spray down the inside of the brain cavity and inside the nasal passage. Turn the skull upside down and start by spraying the nasal area from the back of the skull between the eye sockets and out the nose.

Nasal area: Start by removing the white, rubbery cartridge between the nostrils. If it doesn’t come out while spraying with the hose, carefully use pliers or wire to pull it out.
As far as the nasal bones go, there are two options. The first option is to remove it all (this is easiest and quickest). The second option is to leave it intact. Leaving them looks better, but it’s more time-consuming. Regardless, all non-bone material needs to be removed.

Removal of the eardrum: Next, remove the eardrums. If they haven’t fallen off in the boil, work your flat-head screwdriver between the ear bone and the skull and pop them out.
Once again, use the hose and spray nozzle to flush out any fleshy material. Now, check the brain cavity again to make sure everything is gone.

Final cleaning: once the nasal passage, ear, and brain cavity is clean, and all the large muscle is gone, work on removing the remaining rubbery, stubborn meat and fat at the back of the skull. This normally sticks the hardest. Take an old metal spoon as well as the screwdriver and scrape it off. The rounded spoon works well for scraping off the excess without scraping the bone.

Once this is finished, hose the skull down one more time. It should be completely clean by now. At this point, make sure to fish out any missing teeth or parts of nasal bones that fell off or broke (make sure they’re clean and then set aside). If pieces did fall off, let the skull dry before reattaching.

Step 5: Glue and Whitening
Once the skull is cleaned, you’ll want to reattach anything that fell out using super glue. This is easy and self-explanatory.

At this point, the skull can either be left as is, or bleached. Whitening the skull looks good and cleans it up a bit. There are two options for whitening.

Basic White/peroxide: One is to buy 40-volume hydrogen peroxide and a product called Basic White. These are be mixed together to form a paste and then brushed on. Once the mixture dries, the excess is wiped off and the skull will be white. These products can be purchased online from a taxidermy supply company. It’s around $40 total and does multiple skulls. Make sure to use gloves and not get on your clothes or skin.

Hair dye/bleach: The second option is to use blonde hair dye or hair bleach that can be purchased at a local grocery store. This is easy, because you can find it anywhere. I generally get whatever is cheap but Nice and Easy works well.

Mix the two-part solution into a bottle and coat the skull. Spread it around to coat the entire skull. If you want it off-white, it can be washed off after an hour or so. I generally just leave it on overnight and then wipe up anything that hasn’t dried. If you need it whiter, another application could be done, but one is normally enough.

Take caution when bleaching to not get it on the antlers! If you do, wipe it off immediately with a wet rag.

Degrease
Once bleached and dried as a final step, I use a spray degreaser to remove the fat that has accumulated around the base of the antlers as a result of boiling. You now have a wicked-looking skull ready to hang on the wall!

Blackened Elk Rack, Anyone?
One time my DIY skull mount did not go as planned. My brother and I put two elk skulls in the pot to boil. We ran into town, grabbed lunch, met up with some friends, and completely forgot we put the skulls in the pot. Eight hours later, we came home to a burning smell. The water evaporated and the skulls and antlers were burnt to a crisp! Learn from our mistake! Don’t let your pot run out of water.

Hanging the Skull!
If you want a natural upright position for display, Skull Hooker (www.skullhooker.com) makes a perfect and easy product for mounting to the wall. If you’re on a tight budget or aren’t particular about the display angle, just run a piece of wire through the two little holes in the back that go into the brain cavity at the occipital joint. Then attach to a screw on the wall.

Make it a Piece of Art
Instead of bleaching the skull, try painting, beading, or dipping it. Textured and metallic finish spray paints and other ideas can give the skull a unique look and stand out from a standard skull mount.

Soda Science
Baking soda or Sodium Bicarbonate (NaHCO3) added to the water aids in the process of cleaning the skull. Baking soda is an amphoteric compound, meaning that it reacts as both an acid and a base. It can neutralize the production of acids, making it work as an antiseptic in some instances, but it also tenderizes the meat and makes everything fall off the bones easier. Its cleansing properties extend into helping whiten the skull as well. It helps degrease the skull, making it easier to work with and get a cleaner product sooner. It also aids in absorbing smells, keeping the boiling pot and the finished skull from stinking.
Reactions: ktaboga