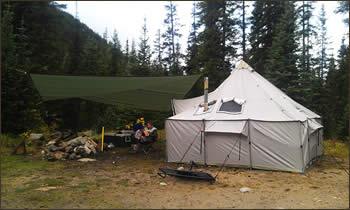 As my hunting partner Matt and I rolled into the parking area at the bottom of the two valleys we planned to archery elk hunt, a broad smile formed across my face. We had just finished driving almost 1000 miles through the night from our home state of Wisconsin with a mix of excitement, anticipation and a little nervousness. This would be our first year hunting this area other than a couple days at the tail end of last year's season. One reason for the smile was that we had finally made it back to the mountains I love so much and, unlike the solo scouting trip I took a month earlier, (read my scouting trip report HERE) we had our bows along and hoped to use them. The other reason for the smile was that there was only one other camp set up. You never really know what you're going to find when arriving at a hunting area on public land. I was anticipating several more camps set up like I had seen the year before, so only finding one was a huge bonus. We received another bonus a moment later when we pulled into a secluded camping spot off the main parking area only to find a huge pile of firewood left behind by previous hunters. Archery elk hunts at high elevation are exhausting affairs and eliminating the job of making firewood would save some much needed energy.

For this hunt we planned to set up a comfortable base camp and hunt out of it for the first few days. If we felt the need, we would pack a spike camp far into the valley for a few nights. Base camp consisted of a 12x12' Cabelas Alaknak wall tent with a Riley wood stove, cots, a portable table, lantern, propane cook stove and a couple bag chairs. I've learned over the years to keep my camping gear fairly simple. Each year I weed out the items I brought the year before but never used. One of my favorite base camp staples is a large tarp strung from the entrance to the tent over a large outside area including the firewood pile and fire pit. The tarp provides shade when it's sunny and hot as well as protection from the common rain showers and storms that hit at the worst times in the high country. Running the tarp over the fire pit and wood pile ensures the ability to have a nice warm fire after returning from an evening of hunting in the rain. And let's face it, rehashing the day's events around a roaring fire is one of the best parts of hunting. A simple tip I've learned over the years is to use bungee cords between the tarp's grommets and the rope used to string the tarp. The bungees absorb most of the stress put on the grommets from flapping in the wind and reduce the chances of blowing out the grommets.

After setting up base camp we had a few hours available for an evening hunt and chose to slowly hunt the mountainside across the small river from camp. After being cooped up in the truck for 18 hours, our bodies appreciated the light exercise. We didn't find any elk signs and returned to camp just as some light rain showers began. It rained on and off throughout the night and when my alarm sounded at 5 am it was immediately obvious that the rain had picked up overnight and was coming down in steady sheets. The plan for the first morning had been to leave just before shooting light and hike the good trail into the southern valley. We would consider this a warm up hunt day giving our bodies a chance to acclimate to the high elevation. We live at under 1000 feet of elevation and our base camp rested at about 9800 feet. We would hunt as high as 12,000 feet. I love spending time at high elevation in the mountains, but I do suffer from altitude sickness sometimes. I have found that it can be extremely helpful to take it easy the first couple days at elevation to give my body a chance to acclimate. The Southern valley doesn't have as much elk habitat as the northern one plus it has a nice trail leading to some high-mountain lakes resulting in more hiker traffic. Because of this, I had pretty low expectations of getting into elk this first day. Instead we would have a nice hike, glass some beautiful country and do some fly fishing at the lakes. With the sound of heavy rain pelting the tent it was easy to decide to sleep in and wait for better weather before starting our warm-up hike.

The rain lasted until around 10:00 and we hit the trail around 10:30. After gaining some elevation and popping out of the thick timber we slowed down and glassed the mountainside's mix of timber, avalanche chutes and grassy areas. We started to head down the trail again and Matt stopped in his tracks and said "Bear!" About 100 yards below and behind us was a nice bear digging for grubs near the river. I was able to get a nice picture of it using my 10 power binoculars as a zoom lens. Matt cow called to get the bear to pose for the picture. Last year I had a rifle and a bear tag in my pocket and didn't see a single bear. It figured that this year with a bow and no bear tag I would see a beautiful bear on our first morning!