Coyotes In Your Pocket - A Quest To Shotgun Coyotes 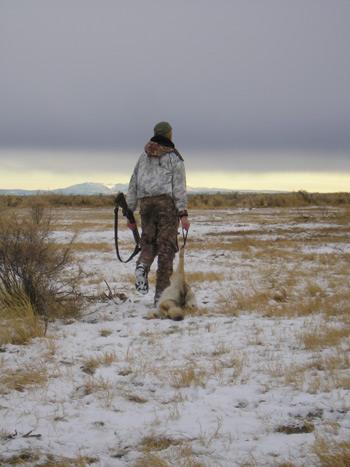 Coyotes in Your Pocket: A Quest To Shotgun Coyotes

New country, new set-up and no real clue of what is coming. Six minutes into the stand a coyote blows out of the brush line just feet from my son, Ben, and I. It has our scent now and it’s going hard across the small meadow in front of us. Simultaneous shots from my 12 gauge and Ben’s .17 send her skidding through the hay stubble before she makes it 30 yards. Did that really just happen? This is a little more up-close and personal than our normal sets.

We’re riflemen. In fact my wingshooting ability leaves much to be desired. Before Ben was hardly a twinkle, his older brother, Hank, used to tag along with me while pheasant hunting in Central Washington. I’d pick Hank up at the house and take him on short hunts with me after work. He was five or six at the time. My German Shorthair bitch, Jill, had far more experience with pheasants than I so it wasn’t a big surprise when she locked on a ringneck not far from the house. Hank and I walked in and a beautiful rooster erupted into the clear blue sky. I fired twice and, as was many more times the case than I would like to admit, the bird flew over the fence and into an adjacent field. I reloaded and in less than a minute, Jill locked on point again and once again a rooster cackled as it made its ascent into the fall sky. Two shots from the Browning hurried it on its way not touching a feather. What do you do? I told the dog, “Find us another rooster, Jill.” Hank adds from behind me, “Yeah. Find us a slow one!” He was a cute child...

So, needless to say, shotguns are not my forte’. I’ve shot them. I hit occasionally but I’m by no means a natural wingshooter. I guess that’s the reason that I’m primarily a rifleman. I strive for set-ups that bring me the advantage when rifling coyotes. Slightly broken terrain to get some elevation, a mosaic of vegetation to see approaching coyotes and some openings in which to stop the coyote for a shot are the things I look for in the ideal stand. As soon as the coyote gets inside 200 yards, I’m looking for a place to bark him to a stop and the result is a dead coyote. Accurate rifles, crisp triggers and good glass are what life is about, isn’t it?

And, yet, there’s been a nagging thought in the back of my mind that I haven’t been as well-rounded a coyote caller as I should be. Driving by miles of coyote country to get to an area conducive to good rifle stands has never bothered me. But, the result of choosing poor stands haunts me and haunts the coyotes that have left those stands with their PhD in their hands. I’ve really been OK with all that at least until one particular contest hunt.
The coyotes were responding during this hunt. Boy, were they responding! We had hot coyotes coming hard and from unexpected directions. Some were not about to stop. The resulting fast, moving, close-up shots are low percentage rifle shots and cost us just enough coyotes to take us out of the money. For most of us contest hunting is really less about the money and more about our pride, but afterwards I told Ben that we just had to learn to shotgun coyotes. So, as hard as it was, I began leaving the rifle home.

Feeling about half naked and wondering if I could hit anything anyway, I started my quest. I had previously purchased a Remington 11-87 turkey gun with coyote hunting in mind. A Dead Coyote choke tube was installed. I put a Tru-glo fiber optic three dot sight on the rib making it more like an open sight than a shotgun bead-- comforting to the rifleman-turned-shotgunner. My brother told me of his attempt to remodel his scattergun for coyotes and how far off of point of aim it shot so, after taking out a second mortgage on the home, I purchased a few boxes of Hevi-Shot’s Dead Coyote 3” T-shot and patterned my gun. It was good thing I did as the center of the pattern printed about 12 inches high at 40 yards. Good to know. The difference between POA and POI could have stopped my shotgun-coyote efforts before they got off the ground.

Lesson Number One: Pattern your Shotgun.
The next stand turned out a little different than the first. Ben and I set up next to a slightly larger opening--Ben again with his .17 and me with the 12 gauge. Not long into the stand a pair was coming hard from Ben’s side. Barking had little effect and Ben took a shot at the lead coyote, a big male. The shot missed and I opened up with the shottie finally knocking the coyote down on shot number three. Ben put a finisher in him with the .17. As we walked up to the coyote, I realized I already had over ten dollars worth of shotgun ammo in this coyote hide!

Lesson Number Two: Heavier than Lead Loads are Expensive.
I’ve tried some lead and copper-coated lead shotshells as well as the Hevi-Shot loads and all have been effective. The position of the coyote in relation to the shooter and the coyote’s adrenaline level seem to have more impact on the effectiveness of the shotgun than the load itself. However, a friend of mine, Bob Morris, has much more experience shotgunning coyotes than I. He feels the heavier than lead loads are significantly more effective and that the new 15 gram per cc ultra-heavy shot is even better yet. Prices have sky-rocketed recently on the tungsten alloy shot and the shells are getting increasingly expensive but if you want to maximize the effectiveness of your shotgun for coyotes, they may be worth the money. Stock up now if you can find old inventory of UHD loads.
Since, my primary coyote hunting partner went to college this fall, I’ve been double carrying a rifle and shotgun on most stands. The shotgun stays in my hands and the rifle is set up next to me on a Stoney Point Rapid Pivot Bipod. The shotgun has accounted for over 80% of the coyotes this fall although the rifle has finished a few after knocking them down with the shottie. The shotgun opened up a lot of areas closer to home that would have been too tight of cover for good rifle stands. A couple of shotgun doubles have fallen to the 11-87 and having coyotes close enough to hear them breathe adds another dimension to the game.

Recently after making a delivery to a ranch on which I have permission to hunt, I set up next to an island of brush surrounded by meadow and then sage. It was late and this would be the last stand of the day. I sat next to a large greasewood looking over the electronic caller so I could see the downwind (Titus’ Rule). A thundering of feet coming from over my right shoulder became evident. Turning my head ever so slightly to the right and looking out of the corner of my eye I saw the coyote stop ten yards away at the edge of the brush line. It moved to its left stopping just on the other side of the greasewood from my chair. It was standing four feet from my right rear pocket. Its next move should have put him behind me so when he didn’t show up, I jumped to my feet. He started away with the classic loping–while-looking-over-his–shoulder move of a big coyote but made it less than 20 yards before the shot collided with his head and neck. Now that’s a coyote in your pocket!

He was one of the fattest coyotes I’ve ever killed. He had fed well over the summer and fall but the game birds and animals would get a break from his dining now. Lesson number three: coyotes in shotgun range have radar. Full camo including your face and hands will help but any move you make will be noticed by the coyotes even when using motion decoys. Don’t move until you’re ready to take the shot. My quest has also taught me to raise a knee up and rest the shotgun over it to minimize the amount of movement necessary to bring your shotgun into play.

After another ranch delivery, I stopped to make a stand. Again the sound of footsteps preceded the appearance of the coyote ten yards to my right. As I slowly began raising the shotgun, the coyote immediately saw it and turned away from me into the opening next to the caller. The first shot knocked him down but he began to regain his feet. The second shot hit him again and after the third shot, I was still forced to switch to the rifle to finish the big male. Feeling a little silly staying there after the barrage of gunfire, I nonetheless held my position and checked the shotgun. One shell left.

Sure enough, two minutes later more footsteps are coming. Out of the corner of my eye a coyote is about to cross behind me into my scent cone at just two or three yards and, again, it doesn’t come by. Jumping to my feet, it actually surprises me to see the coyote roll at the shot. But, she too begins to regain her feet and I set the now-empty shotgun down and finish her with the rifle as well.


Lessons Four and Five:
Continue to call even if you’ve fired multiple shots. The security of the cover may make additional coyotes comfortable enough to still respond to your call. And, secondly, a coyote on adrenaline can take a lot of punishment. If a coyote is still struggling, keep pounding it until you are sure it’s finished. Bob Morris again instilled his wisdom in me for lesson number six when he said, “I thought everyone took at least ten rounds of shotgun shells in their pocket.” Point well taken.

Shotgunning coyotes has become a sport unto itself opening up new areas to hunt that many times have more dense coyote populations than the open country sought after by the rifleman. The close-up, fast action puts a new spin on an already exciting sport. Don’t give up your long range rifle but for a new challenge break out the shotgun and set up where you can put some coyotes in your pocket.