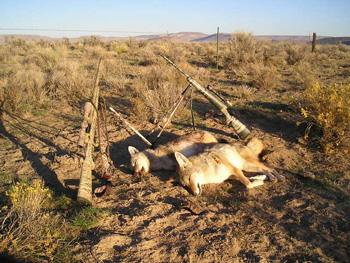 The “Get-Your-Attention” howl was followed a minute later by Jack Rabbit Distress from a run-of-the-mill production open reed call. Nothing more high tech was necessary to have a mature pair of coyotes running at us through the sage one abreast of the other. My son, Ben, twelve at the time, sat across the sage from me and I whispered, “Left and right, Little Buddy. Left and right.” indicating how we’d engage the targets. I “woofed” and, as luck would have it, the coyotes each stopped in the open and the simultaneous shots from our rifles dropped them both in their tracks. It was one of our first doubles together. We couldn’t have been happier.

A careful approach set the author and his son up for this coyote double.


This stand didn’t start with that Lone Howl, however. It began before we left home, and included many small things we did and didn’t do which set us up for success. I’ve been around enough new callers to know that many have already defeated themselves before their lips ever touch the call or their fingers ever contact the remote. The Approach is what I refer to as the series of actions leading up to actually setting up for the stand. The Approach can open you up to success or scare every coyote in the country away before you begin to call.

Coyotes vary in their sophistication in different areas. Coyote age, density and exposure to people (including hunting) all affect how much tolerance coyotes in a given area have for noise and human activity. Tim Lewis and Mike Messina of L&M Productions have some great footage on their Coyote Rage video of a coyote responding to their call in an active ATV area. The coyote climbs up on an elevated spot to look for the source of the call and several ATV’s race past just yards away. The coyote barely gives the ATV’s a second glance! The ATV’s had become a part of the coyote’s daily life. In another area the coyote would have run for its life at the first sign of an ATV. But, even tolerant coyotes will become suspicious when human activity veers from the norm.

Your calling vehicle is a great place to start when analyzing your Approach. If you’re in ranching country, a diesel powered truck may not be a disadvantage but, generally, the quieter your vehicle, the better. If forced to use a louder vehicle, resign yourself to walking further before calling. If your truck’s exhaust system causes the testosterone to flow when leaving a stoplight, it may not be an advantage when trying to achieve stealth while approaching your stand. Same goes for that subwoofer taking up half the back seat. During my oldest son’s high school years, as he neared home, my wife could feel the vibration of his stereo system before she could hear the music. Once we are within a mile of our calling area, we turn the stereo off completely. Don’t underestimate your quarry.

Similarly, tighten any loose suspension components. Loose shock mounts can make more noise than the rest of the truck combined. Oil squeaky door hinges and the door latches so they work easily. And, don’t slam the doors! I can’t count the times I’ve invited someone to go coyote calling and the first thing they do is slam the truck door upon exiting. Never slam the door! Lift up on the latch as if to open the door, push it closed then release the latch. The door will close with hardly a click. Similarly, charge your AR15 or shotgun at the vehicle. Slamming the action home at the beginning of the stand is not conducive to successfully calling predators.


ATV’s and UTV’s will benefit from the same attention your truck does. There are many aftermarket exhaust “silencers” available that may increase your stealth when hunting with ATV’s. If recreationists or trappers are using ATV’s regularly in your hunting area, the predators may become fairly tolerant of ATV noise as proven by Lewis and Messina.


Again, coyotes in different areas require different levels of stealth in the Approach. I, personally, always park my vehicle out of sight of approaching predators. We’ve had coyotes hang up or begin to come into our stand then leave. Many times we’ll look back and find the vehicle wasn’t as well hidden as we thought or the coyote came from an unexpected direction exposing the truck.

After parking out of sight, I then move as quietly as possible to my set-up. Some of the worst calling we’ve experienced has come during periods of crusty, noisy snow. If you can’t get to your stand quietly enough, you won’t call coyotes. Sometimes you need to be creative. Ben and I wanted to call a stand that was a consistent producer but the snow was very crusty and noisy in the draw that we normally followed into our set-up. We actually contemplated abandoning the stand but Ben saw an opportunity. Instead of following the shaded draw, we traveled a more exposed area of the ridge where the sun had softened the snow and exposed other areas completely. We were able to approach the area quietly enough and mostly out of sight. We called in a nice silver coyote.


Tuck your calls into your jacket separating them into different clothing layers if necessary. Oil your sling swivels. Use rubber armored binoculars or put them in a fleece case. Put your cell phone on vibrate unless you have Jackrabbit Distress as your ring tone!

Casting your scent cone into the area you’re calling can also be a deal breaker. Keep the sun at your back whenever possible and keep your hand movements to a minimum. A coyote’s distance vision is not acute but they have an excellent ability to pick up quick movements. Swinging your shooting sticks around or gesturing with your arms can attract a coyote’s attention. And, by all means, if you need to talk to your partners, do so at a whisper. The human voice can carry an amazing distance on a calm morning.

For stealth, lift the door hatch, push the door closed then release.


Another advantage of a stealthy approach is that it saves time. I hear of many hunters reaching their stand then sitting for a while “to let the area settle down” before they begin calling. I rarely wait to begin calling. If my approach was bad, my calling is likely to be unsuccessful regardless of how long I sit. Less time before beginning calling means more stands made in a day. More stands equals more coyotes.

If your calling success has been limited, don’t necessarily assume your calling is to blame. Look more closely at your Approach. The more pressure an area receives and the more sophisticated the coyote, the more stealth is required to arrive at your stand with a reasonable chance to call those coyotes that are within ear shot. If you’re already calling coyotes, a stealthy Approach will still put more fur in the truck. I guarantee it.