Long Range is all about ballistics. Beyond that, no more than luck can be expected without it.

About a year ago, the Lapua company released aerodynamic data for some of their bullets. However this time the numbers were based on measurements taken by Doppler radar. It’s important to note that no public details were given in regards of the equipment and configuration used to take the measurements and post processing.

Doppler radar is, without a doubt, the most reliable method known to ballisticians to obtain in-flight aerodynamic data. Doppler radars are used to acquire exact real world data on the flight behavior of bullets. From the collected data points, through a process called Data Reduction, Lapua derived Coefficient of Drag curves, from which BC and other important parameters were calculated then referenced to the ICAO Standard Atmosphere, in order of make these numbers useful for post processing in ballistics programs.

Since the sole objective of ballistics programs is to predict downrange trajectory parameters, a good friend of mine asked me to compare the output of LoadBase 3.0 to a well established baseline. This was difficult to do since serious baselines do not easily reproduce out there. I thought that a baseline should be verifiable and of course, based on trusted facts. For that reason I chose to rely on the data supplied by Lapua as a baseline, because it meets the two aforementioned objectives: it’s public and it’s based on radar measurements.

Granted, comparisons are by nature good food for dispute, and I like that a lot. In fact, I know there are many questions that could remain unanswered, but I prefer to keep this article as simple as possible in order to avoid any mathematical complexity which could prevent reaching a large audience. I’m the first one to acknowledge that more scenarios are needed to obtain in-depth conclusions, but the baseline data I’m using has its restrictions. Nevertheless, simplicity in both the presented data and conclusions is by no means any indication of an inaccurate concept or biased conclusions.

Unfortunately the data supplied by Lapua does not include transonic/subsonic data, since the dataset used for the assessment is limited to 1000 yards, and this cartridge/bullet combination reaches the subsonic threshold at about 1600 yards.

Even under this limitation, the evaluation is quite useful to show some aspects of the different approaches taken by the most common ballistics engines in use, which is in the last instance the main purpose of the article.

For those interested, the flyer with the information used here as the “baseline data” can be downloaded at:
http://www.lapua.com/fileadmin/user_upload/esitteet/338LapuaMagnum2010.pdf

The reference used is the Imperial units chart, and all the calculations were based on the following parameters.

It’s significant to realize that the BC-G7 is a calculated value, resulting from a conversion made using the “Analyzer” module of LoadBase 3.0. Lapua does not provide other value than the G1 reference. As can be verified the other parameters values are taken from Lapua’s chart “as is”.

The following charts shows two ballistics results, Velocity & Path, where each one is compared to Lapua’s data against the predictions made by LoadBase 3.0, the Point Mass and Pejsa methods, both of which are well established in the shooting community.

The graphs are based on the arithmetic difference between the baseline data and the corresponding predictions as yielded by the different engines. While it’s possible to perform other statistical analysis, I found no sensible reason to do that. For the objective of the article, there is no need to complicate matters.

Just for the record, without reliable data no ballistics engine in the world can adapt itself to match field data. Tweaking is not a recommended general procedure, unless the shooter is very knowledgeable and is 100% sure of what parameter needs to be adjusted from the published values.

In short, how one can be sure that the value to modify is the BC? Why not the Zero Range, the Sight Height or the Muzzle Velocity? What about the environment conditions?

Some are non-linear parameters and most of the time, tweaking them will make for a certain point along the trajectory while the other results will become twisted at other range. Be careful, when it comes to adjust the input and be sure that the collected field data can be trusted. 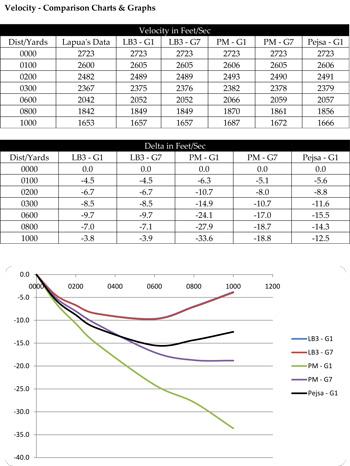 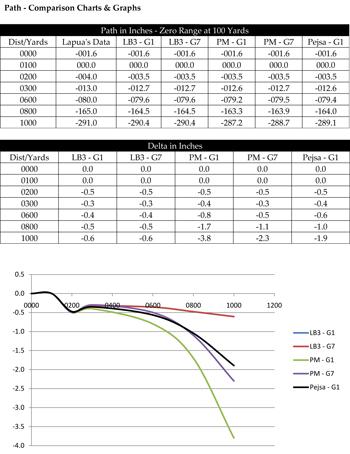 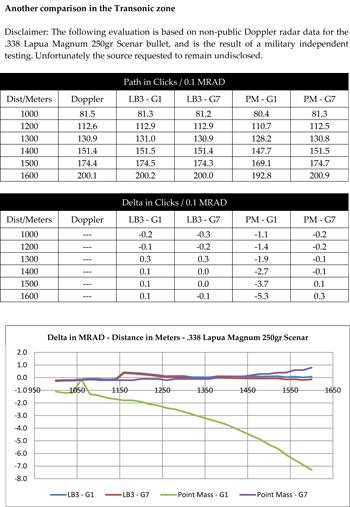 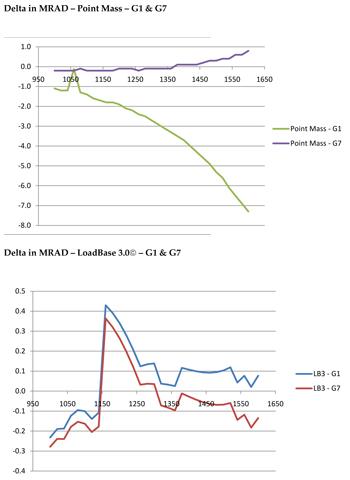 As commented before, the comparison is only performed on the supersonic zone, which is a “comfort zone” for most ballistics engines. However it’s hardly a handicap at all, given the fact that 1000 yards is probably the range span where 90% of the shots are taken.

In our pattern, it’s pretty evident that Lapua’s Scenar bullet is best represented in the Point Mass method by the G7 standard, which is correct since its design is best matched by the streamlined reference.

Due to their scale, the graphs are not clear enough to acceptably show the G1 & G7 curves for LoadBase 3.0, which are basically superimposed. Regrettably there is not much to do about that.

Any method to be regarded as valuable has to meet three significant conditions: be accurate, robust and practical.

• Being accurate is an easy to understand concept, but it’s a good idea to remember that all weapons shoot to an area, not to a point, since dispersion is impossible to defeat. I mention this because more often that desired, most shooters tend to view a ballistics program as inaccurate without considering the weapon’s dispersion, wrong inputs and lack of basic understanding of exterior ballistics.

• Being robust is the ability of a method to deal with a wide range of conditions and input values without having its accuracy compromised. It’s clear that a method that cannot correctly deal with non-standard conditions or different drag functions is a limited one and its weakness will then become a major obstacle for obtaining true predictions.

• Being practical is of paramount importance. It’s related to the aptitude of the method (ballistics engine) to handle with similar ability different drag functions, because in today’s world the availability of measurements for the G7 standard (when suitable for the bullet) or Cd tables are extremely limited. Of over 3000 commercially available bullets, only a very limited set comes with measured G7 data.

It is pretty noticeable, as expected, that the Point Mass method is quite reliant on the selected Drag Model, a fact that was proven by many tests. It’s not a criticism of the method itself, since there is nothing wrong with that. But, that makes the Point Mass method not very practical, since when not coupled with the right drag model, accuracy can deteriorate significantly.

In contrast, the LoadBase 3.0 ballistics engine shows its flexibility by accurately handling either G1 or G7. Check the almost indistinguishable curves. Therefore we can say that the engine is not drag-dependent since its accuracy is not affected by the selected drag model.

In our example, the Pejsa’s method is a better technique than Point Mass, since even using the G1 drag model, it exhibits less differences.

So, the final question could be: Which one is the better? I think that the answer lies in the judgement that every reader can make of the facts presented here. I’m limited to presenting them in the most unbiased way I possibly can.

The Pejsa method is used by the following free and commercially available ballistics programs: FFS (Field Firing Solutions), BallistiX, Dr. Pejsa’s own plus some free spreadsheets like BfX. One of the typical issues that are encountered with most of the usual solutions is that they are limited to supersonic velocity values, something very critical to take into consideration when evaluating these programs. The algorithm can be studied in the books published by the author.


Gustavo Ruiz is long time enthusiast of ballistics, reloading and above all hunting big-game. He has contributed many articles for both American and foreign magazines. Professionally, he spent eight years at Microsoft. He holds a BS in Computer Science, a BS in Operations Research and an MBA. Gustavo is also a LtCdr (res) in the Argentine Navy, and is involved with the LR shooting training program of their Special Forces operators. Currently he is developing ballistics/reloading software through Patagonia Ballistics (http://www.patagoniaballistics.com), a small software development group located in Argentina.