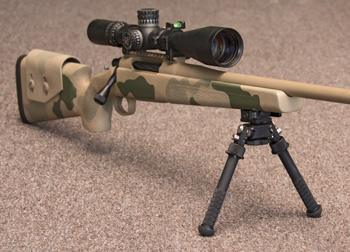 If you have spent some time in the field behind a rifle, it’s no secret that you need a quality bipod to accurately engage targets at longer ranges than most are accustomed to. There are a plethora of bipods available on the market, but none come close to what the Atlas bipod has to offer. Its simple, clean, robust design lacks bulk and exposed springs, and works extremely well.

My search for the ultimate bipod started when I found that my “tried and true” Harris could not take the punishment handed out by my .408 based wildcat rifles. 20lbs of rifle was just a bit much for a bipod designed for sporter and varmint rifles. While talking with a SEAL friend of mine, he suggested I take a look at the Atlas bipod. Well, I did, and I never looked back...

Publisher's Note: This is another example of products that we offer in the
LRH Store entirely because of my search for a better mouse trap for my own personal use. My thanks to Joel Russo for writing this review of the bipod.
- Len Backus -​
B&T Enterprises LLC, the manufacturer of the Atlas bipod, began marketing the bipod in 2010. The Atlas bipod has several patented features including multiple positioning legs, and the ability to pan and cant. The legs can move independently, can be deployed in a 45 degree position either forward or backward, in the traditional 90 degree position, and facing front or back, locking securely into 5 positions through a 180 degree arc. The Atlas bipod provides the shooter with 30 total degrees left to right pan as well as 30 total degrees of cant.

The Atlas bipod is constructed of stainless steel and aircraft grade aluminum and weighs in at a mere 12.7 ounces including the small picatinny rail. There is an adjustment knob which provides tension from moveable to locked when panning or canting. The lowest position of tension allows you to move the rifle, but still provides enough tension to hold the position through the shot. For maximum adjustment and flexibility the height can be adjusted from 4.75” to 9” using the leg positions and the leg extension positions. Simply pulling down on the bearing detent leg collars allows quick and easy adjustments through the five leg locking points. For those who want longer legs, there are 3” extensions available.

Pictures above and below show optional quick-detach feature

I have used the Atlas bipod on AR format rifles, sporter rifles, varmint rifles and extreme long range rifles. I have shot out to 3,000 yards utilizing the Atlas, and I have been impressed with its extreme flexibility and its ability to compensate for poor positioning that we are sometimes forced into. I only wish this bipod was available during my LE and military service years.

My conclusion is that the Atlas bipod is one serious piece of equipment for serious operators, hunters, and shooters. Yes, it is expensive, but given its features, quality engineering and most importantly the flexibility of use, the Atlas bipod is worth every penny. Some of us playing this game are not willing to settle for second best, and are willing to pay for the best engineered equipment available.


Joel Russo has an extensive law enforcement and military background. He has been hunting and shooting in extreme long range competitions for over a decade. He is currently married, has two boys, and resides in PA. He makes tactical and hunting stocks with exotic and highly figured domestic hardwood, and will be introducing custom actions in the market place shortly. He has partnered up with Chase Curtis, and will be selling the actions under Curtis Custom, LLC.