All About Riflescope Reticles 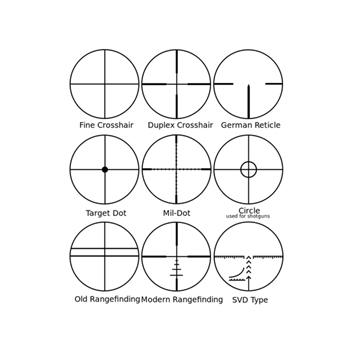 All About Riflescope Reticles

A reticle is simply a set of markings inside an optical device for use in measuring, pointing, aiming, etc... My 8" Newtonian telescope comes with an eyepiece that you can use for aligning the telescope with the Earth properly so its drive motor pre-programming can drive it to pre-determined astronomical points of interest automatically. Inside that eyepiece is a reticle of sorts, there are several stars and constellations. You adjust the scope to place the legs level and the aiming arrow facing north and adjust the telescope so that those reticle elements are placed on the actual image of them in the sky. Once the reticle and the real stars are aligned, the telescope is aligned. Nifty huh? It’s really a bigger pain than it’s worth but super useful if you want to use the tracking feature so the telescope moves with the stars so you can do very long time exposure pictures.

In weapon scopes we have quite a lot of variety. Part of that comes from the variety of weapon types and part comes from the variety of ways those weapons may be utilized. There is such a thing as a general purpose rifle scope which would tend to come with a general purpose reticle. Anything that's meant to be general purpose can be pressed into service for most needs but it's not going to be optimal for probably any of them. This means it's important to select your reticle with the same pickiness that you'd select your rifle, your ammo or your boots. Make sure it's up to the task.

Reticle designs have exploded in number and manufacture method in recent years. As people have crafted new solutions to new and old problems, the number of reticles and their specialization has dramatically increased. What many will find surprising is how astonishingly old most of the technology used today is. There is some exciting technology that's been developed in more recent years but the fundamental method for creating a reticle hasn't changed in centuries.

In the oldest days you may have had a simple crosshair which would have literally been a pair of intersecting spiderwebs (which are astonishingly strong and flexible) or actual hairs or wires tied or glued between points inside the scope. Primitive and fragile though they are, they solve the first problem: The aim point. Now there is one instead of just a view of some section of the target with no identified center. They’re also super easy to manufacture.

Before long it was realized that there was a growing need for more sophisticated aiming points and for those points to be useful for intelligence gathering. Thankfully the technology to make such a thing had existed for a very long time already. One problem a wire crosshair will not normally experience is flecks of debris appearing to float on or around the reticle. That normally only happens with etched reticles, which brings us to:

As early as the 1700's crafty people were thinking of etching a reticle onto glass. This practice allows extreme flexibility in reticle design as floating elements can be very easily accommodated. This is the dominant system in top quality magnified rifle scopes today. Some have said that etched reticles are less durable than wire (Wikipedia). I would dispute the hell out of that.

A genuine problem brought in by etching is that the etched bit will disperse some light thereby lessening transmission marginally. Etched reticles are more expensive and difficult to manufacture and they are able to rotate which is annoying and unhelpful and requires advanced adhesive technology or mechanical impingement systems. Where wire hairs may break under the stress of a big shock (like dropping the rifle), etched reticles may also rotate after a big shock or flecks of debris may find their way onto the lens element with the reticle etched into it. Etched reticles exist on their own hunk of glass which brings in many more of its own issues to be dealt with.

Reflected reticles aren't inline with the incoming light like wire and etched reticles. Reflected (called Reflex) reticles are literally projected onto a lens at an angle and the image reflected back to the shooter superimposed and collimated with the target image. The AimPoint CompM2 uses this system as do many red dot sights. The need to project light onto the lens through which the primary image is coming means that there's a sort of minimum line width and brightness which is pretty beefy when compared to a wire or etched reticle. There's also the potential problem of bloom.

Bloom is not entirely common anymore but it consists of a scatter effect like looking into bright lights at night. Reflex reticles which are high quality will not exhibit bloom. Because there are no physical parts of the reticle as such you can get very creative about reticle design just like with etched reticles. Battery life with these can be ridiculously long (on the order of years of power-on running) because of the low power output needs of the illuminator.

Holographic reticles are much like Reflex reticles in that they use light to bring the reticle to life. Unlike Reflex sights that project light onto an interior surface to form the reticle, a holographic sight uses an etching on a lens element in the primary optical path which is illuminated by collimated laser diode. It's a bit like a mixture of an etched reticle with an illuminated/reflex reticle. Similar to Reflex sights, holographic sights can suffer from bloom. Battery life with these can be poor compared to a Reflex sight due to increased power needs to illuminate the hologram. Eotech 512.A65's use this system.

Focal plane is pretty simple to understand. First focal plane refers to the placement of the reticle element literally near the front of the scopes internals, in front of the magnification lenses with one result being the reticle is the same angular size relative to the target or object being viewed. If I were to wear a t-shirt with a big X on it and walk towards you, you'd see the X get bigger and bigger because it's attached to me.

Second focal plane refers to the reticle always staying the same size. This can be modeled by placing a big wire X a few feet in front of you and having the target move toward you but not having the X move. The X would appear to stay the same size while the targets apparent size would continuously change. Each has its place. This only matters with variable magnification scopes. With a fixed power scope, since magnification never changes, the actual location of the reticle becomes largely immaterial other than for details of manufacturing.
Next page: All About Riflescope Retcles >
Reactions: AGL4now