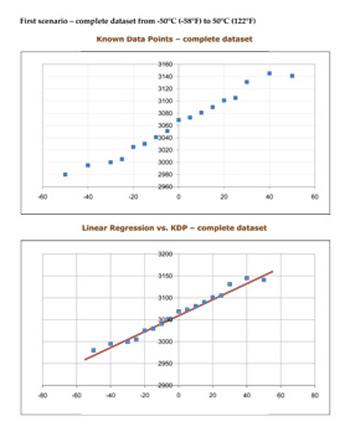 Long Range is all about Ballistics. Beyond that, no more than luck can be expected without it.

It’s a well established scientific fact that air temperature influences muzzle velocity, and under some field conditions that variation can be quite significant, in particular for taking a long range shot.

Recent tests showed a rate of change of about 2.5 to 4.0 feet/sec per 1°C (1.8°F) depending on how sensitive the load’s powder is to air temperature.

Just to give a basic perspective, a muzzle velocity variation of +/- 30 feet/sec can introduce a change in the trajectory’s path of about 1.0 MOA at 1000 yards, (+/- 0.5 MOA) and of course, there is uncertainty that must be accounted for.

It’s important to realize that the focus of this analysis is on the very first shot, from a cold barrel. Then air temperature is the only meaningful and readily available parameter that any shooter can easily take a reading of.

Powder temperature is the real and crucial factor that determines muzzle velocity, as it’s related to the Maximum Average Peak Pressure. From a cold barrel, it’s closely statistically correlated to Air temperature.

Now, the problem is how can we estimate the predicted muzzle velocity (for a given system, comprised of a particular firearm and load) when facing those variations in air temperature…bearing in mind that not all temperature values can be covered during the data collection process.

In engineering applications, data collected from the field are usually discrete and the physical meanings (relationship among the observed variables) of the data are not always well recognized.

To estimate the outcomes and, eventually, to have a better understanding of the physical phenomenon, a more analytically controllable function that fits the field data is desirable as well as required.

The mathematical process of finding such a fitting function is called “Data Regression”, also known as “Curve Fitting”.

Data Regression is a vital part of statistics. It refers to techniques for modeling and analyzing several variables, when the focus is on the relationship between a dependent variable and one (or more) independent variables.

The goal of regression analysis is to determine the values of parameters for a function that cause the function to best fit a set of data observations that you provide by taking measurements of the involved variables.

It’s also of interest to typify the deviation of the dependent variable (muzzle velocity) around the regression function, which can be described by a probability distribution, especially for the case of a “Linear” regression.

Both the method and procedure presented here can focus on “quantiles” (points taken at regular intervals), or other location parameters of the conditional distribution of the dependent variable given the independent variable. This is a very important aspect to take into consideration.

A large number of both methods and techniques for carrying out regression analysis have been developed during the last 300 years, so we can hardly call this a “new” branch of technology in general terms. However research continues as new challenges are tackled every day requiring novel approaches.

Essentially, a user gathers field data in the form of Known Data Points (KDPs), which are MV/Temp data pairs. And from that data, different methods will try to make a “best fit”. As can be expected, the better a method fits the KDPs, the better and more trustable will be the predicted values.

Common methods such as Linear Regression and ordinary Least Squares Regression can provide fair results, if and only if, the gathered data shows a good response to a linear representation. In other words, it correlates well with a “straight line”.

This linear approach is the most common in use, especially by some ballistics programs that incorporate a way to estimate muzzle velocity based on predefined changes of some independent variable (air temperature is the usual one)


The first problem we find with a linear approach is that it rarely fits the KDP pairs, since a perfect correlation is very difficult to observe in the dataset (field data)

This means that if your log shows that at 65°F your measured MV is 3000 feet/sec, then a linear method will not yield that value at the same air temperature of 65°F.

Clearly, we need to define objective criteria to help us in the selection of the best Regression method, and only then we can make our mind which one best fits our field data.

One of the criteria is well understood (as it’s obvious) for everyone dealing with Regression. That is to find the best function that matches as closely as possible our field data. In short, that “correlates well”.

The second criteria is how good the methods are for predicting both interpolated and extrapolated values. Why? Because that’s where regression will show its value and potential to us shooters as a predictive tool

Interpolating is a must since it’s impossible to have a log of all possible intermediate values that are within the limits of our data. Extrapolating is, by the same token, an essential capability, because we need to know what’s going to happen with values of the independent variable (muzzle velocity) when we have no data outside of our log limits.

In order to understand and visualize the strengths and weakness of the used methods, it’s interesting to see how they execute under two clearly different and alternative scenarios.

The first scenario to consider is when we have at hand a complete log of muzzle velocities for the entire range of air temperature, a “complete dataset.”

The second scenario, which is the more realistic, considers what happens when the data at hand is limited to a particular range of values, which is called a “limited dataset”

These assumptions are sometimes (but not always) granted if a large amount of data is available. Regression models for prediction are often useful even when the assumptions are moderately violated, although they may not perform optimally.

Air temperature values are in Celsius degrees while muzzle velocity values are in feet/sec. For the “complete dataset” the air temperature scale ranges from -50°C (-58°F) to 50°C (122°F). The reason for that coverage is to handle all possible situations and to make for a real test of the fitting functions.

From the graphs a number of conclusions can be made out, that are pretty evident from observation alone.

A Linear Regression even with a “complete dataset” is not a quite good fit, (and the sample data was reasonably “linear”) since most KDP values will lie above or below the Regression Line, as expected.

The Least Squares method will always produce a straight line, even if there is no relationship between the variables, or if the relationship is something other than linear.

An interpolating polynomial such as the “Natural Cubic Spline” provides a great fit, since every KDP is contained by the curve.

The “Delta Spline” also shows a perfect fit, with every KDP on it, as expected since it’s based on an interpolating polynomial.

It’s rather apparent that a “Linear” regression will be a “good enough” solution, but only for a limited range of the predefined air temperature values. Other than that, it’s not very recommended for forecasting purposes of this problem, since it can be appreciated that both the interpolated and extrapolated trends will yield improbable values.

Now, let’s take a look to the second scenario.

Most of the time, as confirmed before, a Linear Regression curve will not pass along the KDPs, and this case, with a limited dataset, is no exception. This of course, was expected.

What this limited dataset mostly shows are the limitation of both the Linear Regression and the “Natural Spline” (cubic) to extrapolate values.

As can be observed, the “Delta Spline” curve will always pass along all the KDPs, with no “overshooting” (as is common with other interpolating polynomials such as the “Natural Spline”) and will provide the best possible fit to the series data.

The method called “Delta Spline” was especially developed for this program, and as such was perfected to deal with this particular kind of data series.

Of the three exposed methods, the “Delta Spline” is the one with greatest potential as a valuable tool to match, interpolate and extrapolate the data series, having been demonstrated to be both reliable and robust.

The sole purpose of these methods is to help to take, as precisely as possible, that critical first shot from a cold bore. They are not meant for the occasional short, medium range shot. If not considering real long range situations (beyond the 800 yards mark) there is no major need to use them.

Gustavo F. Ruiz is long time fan of ballistics, reloading and above all hunting big game. He has contributed many articles for both local and foreign magazines (Spain). Professionally, he spent eight years at Microsoft. Holds a BS in Computer Science, a BS in Operations Research and an MBA.

He is also a LtCdr (res) in the Argentine Navy, and is involved with the LR shooting training program of their Special Forces operators. Currently he is developing ballistics/reloading software through Patagonia Ballistics (www.patagoniaballistics.com.), a small software development group located in Argentina.