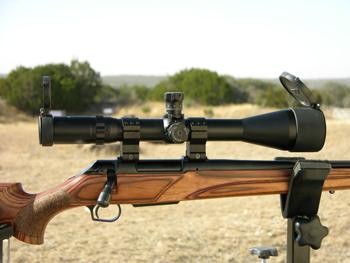 It is an excellent sport, where you can simply take out your basic deer rifle and a couple of boxes of ammunition for a day of fun. After all, there is a special feeling you get when you pull that trigger and then wait those moments before you hear your bullet connecting with that gong, blowing up that rock or taking that animal. But as with all shooting sports, the day will come when you realize that old Granddad’s .30-06 just will not compete with the big boys.

You are looking for a setup that will not be more expensive than your last car, but that you can still use to be a serious contender. You really don’t want to wait months for a custom rifle, and you may not have the time to work up a good hand load. Well look no more. I have found a long range rig that will do everything you want and more, without forcing you to sell your firstborn. You can buy this setup, sight it in, and you will be ready to compete using store bought ammunition.

The rifle I have selected is the Thompson/Center Icon Precision Hunter, which has been available now for a short while. John Barsness recently wrote an excellent review of this rifle, which was published in both Varmint Hunter magazine and on this website last year. Without repeating the article, I would like to tell you about my first experiences with the Thompson/Center Icon Precision Hunter.

Weighing in right at nine pounds without a scope and rings, it is not exactly what you would want to carry on a mountain hike, but it is not so heavy that you will have to delegate it to bench shooting only. Besides, you will appreciate the extra weight after a day at the range. The 22 inch heavy fluted barrel makes up a lot of that weight. The six deep flutes in combination with the holes in the bottom of the forearm help to keep things cool. I would have appreciated about 2 more inches of barrel. Thompson/Center uses rifling called “5R” for the Icon Precision Hunter rifle. They cut five lands and grooves instead of six. They are cut at a 150 degree angle, not the usual 90. The lands look like small mounts and are directly opposed to the grooves. This detail may sound trivial, but what it means is hardly any barrel break in period needed, and little or no copper fouling. In other words, sight it in and you are ready. This will save you a lot of expensive ammunition and time. And when cleaning time comes, you will definitely appreciate this unique rifling.

The action is flat on the bottom with the exception of three lugs that lock into the aluminum bedding. These lugs are where the three action bolts thread into the action. I cannot think of a more secure way of bedding a rifle unless you epoxy it in the stock. The scope bases are also part of the action and accept Weaver style rings.

The trigger is very crisp with hardly any take up. It is adjustable with a specialty tool provided with each rifle. This adjustment is for weight of pull only. The location of the adjustment screw is under the back strap of the action, which does not make it very easy to see what you are doing, and the Allen head screw is very small. I adjusted the trigger down to an average of 2 pounds, 3 ounces.

The scope of choice here is the Millet Long Range Scope. Millet’s quality has come a long way since they first came under the Bushnell flag. This mil-dot scope was developed especially for long range shooting. It is 6-25x56mm with a 35mm tube. Millet claims the larger tube helps transmit more light. I can only say I had no complaint about the light transmission. Millet provides some stout rings with the scope, along with a sun shade and flip up lens caps. It has side focus, which I have grown to appreciate, and lockable target turrets which can go up to 140 MOA in adjustment. While shooting this rig, I found no change in point of impact from 6 to 25 power. The Millet Long Range Scope is a very good buy, and Millet has always given me excellent customer service.

So far, we have a rifle and scope made especially for long range shooting, so how about a long range cartridge? I have loved the .260 Remington round since it came out, so when the 6.5 Creedmoor arrived, I just had to see how it performed in comparison. The problem was, as with so many proprietary cartridges, it is not always simple to find the ammunition, brass and dies when you need them. All I could find were two boxes of Hornady’s Super Performance cartridges in 120 and 129gr.

The Creedmoor was developed expressly for long range shooting. While the ballistics are almost identical to the .260 Remington, the Creedmoor case is slightly shorter to allow for loading the heaver, longer, high BC bullets into rifles with magazines, like the AR10.

Hornady is making ammunition that is of match quality. Hornady even prints the load information on the Match Creedmoor ammunition so that reloaders can copy the factory loads. In addition, Hornady is pricing the ammunition very reasonably. In the past, some proprietary ammunition was priced far higher than it should be because the manufacturer had a corner on the market.

Since I had just two boxes of factory ammunition to sight in the rifle/scope and test it, I got a little stingy. The scope was so massive that my regular bore sight would not work. I pulled out a laser bore sight that fits in the barrel. At 25 yards, I adjusted the scope to the laser dot and fired one shot. It was dead center. I then shot at 100 yards and it was still very close.

After four rounds I ran some cleaning solution down the barrel, but there was no sign of copper fouling. In all my years of shooting and testing rifles, I have never had a quality barrel that would not benefit from a break in period. As far as break in goes, Thompson Center says to never shoot a hot barrel, and to clean often.

This rifle, scope and cartridge combination is amazing. Those first few shots grouped at .54 inch with the 120 gr. The 129 gr. came in at .67 inch. Folks, these were the first shots fired through this new rifle. Thompson/Center does not even pre-shoot the rifles. They use a computer generated system to fire for a group. I think this rifle will shoot even smaller groups after about two hundred rounds.

In Texas this time of year, it is rather windy, and the way my range is set up I usually have a south or north crosswind. For the next session the wind was 6-12 mph right to left, full value. The 120gr. was first up. I shot five rounds and the last three grouped .47 inch. To be fair, I cleaned the rifle again and shot five of the 129 gr. rounds. The last three grouped at .28 inch, leaving a nice ragged hole. The rifle apparently likes two fouling shots. There was no sign of wind drift.

That’s when I wished I had some 140 gr. factory Hornady rounds. I could have reloaded some since the dies had just arrived, but this article is about using store bought ammunition. Believe me, after I finish this I will be heading straight to my reloading room to try the 140gr. Hornady bullets.