In recent years, there has been a huge increase in the number of 6mm wildcats being shot out of AR-15’s. This movement was started and driven forward mainly by across-the-course high power shooters that have to compete at ranges out to 600 yards where wind drift can become a big problem. The existing commercially produced 6mm match bullet lineup has bullets that have a significantly higher ballistic coefficient (b.c.) than is typically available to those shooting with the .223 Rem. (or 5.56 NATO). For instance, the age old standard 600 yard loading for the .223 is the Sierra 80 gr. MatchKing bullet that has a b.c. of only .420, but the current 6mm Berger 108 gr. BT bullet has a b.c. of .546 and the 6mm Berger 105 gr. VLD bullet has a b.c. of .556. On a windy day at 600 yards the bigger 6mm bullets can be affected by the wind significantly less than the .223 Rem. counterparts.

This close up shows a 6mm Turbo 40 AR-15 rifle fitted for prone shooting with a sling and a scope. In this case, the top end features a heavy walled rigid billet upper receiver with a side charging handle. With a decent load work up these rifles are absolute "tack drivers" and can easily shoot 10 shot groups under .5 MOA. 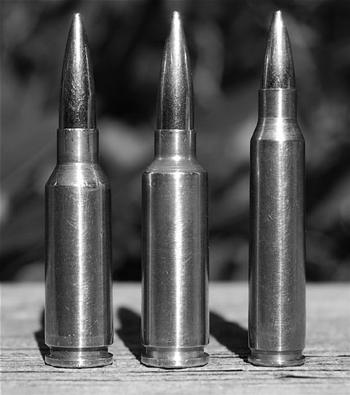 The 6mm Turbo 40 (center) with its 40 degree shoulder, looks like the smaller Ackley type cartridge and here it is flanked by the 6mmAR (left) and the .223 Remington (right). Both the 6mmAR and the Turbo 40 have a case length that makes them ideal for using 6mm bullets out of an AR-15 platform.


Ultimately, I necked down the 6.5 Grendel case and made what is now called the 6mmAR cartridge (see also www.6mmAR.com). The 6mmAR has been very popular with not only high power shooters, but also varmint hunters and others. As usual, however, shooters are seemingly never satisfied with just stopping with what they have and there were immediate calls for even more power, performance and velocity. These requests ultimately lead to the making of the 6mmAR Turbo 40 Improved cartridge (some call it the “Turbo 40” for short).

What Is The Turbo 40?
Simply put, the Turbo 40 was designed to be a high performance 6mm cartridge for use in AR-15’s, although it certainly has application and uses in bolt guns. The cartridge is akin to a long bodied 6mm PPC but it also has a 40 degree Ackley type shoulder and body taper giving it approximately a 38 gr. water capacity vs. the 36 gr. water capacity typically associated with a 6mmAR and the 33 gr. water capacity typically associated with a 6PPC. It has the case capacity of a 6mmBR cartridge, and can easily shoot the big 105-108 gr. 6mm bullets up to the 2900 fps range. That’s a lot of performance out of an AR-15!

This 6mm Turbo 40 AR-15 Varmint upper was built up for varmint hunting in South Dakota - plenty of punch with rapid follow up shots and very low recoil! This upper is a "plug and play" setup and it pops right on any standard AR-15 lower.


The cartridge is made from Lapua 6.5 Grendel brass that is necked down in a Turbo 40 resize die and then fire formed in the rifle to blow out the brass and make a larger capacity case with a 40 degree shoulder angle.
If you want to get a mental picture of it, it looks like a slightly smaller 6mm Dasher and the cartridge uses a PPC bolt face. Hmmm . . . similarities to the Dasher & PPC cartridges? Yup, you guessed it, accuracy is great with the Turbo 40 cartridge as well.

The Turbo 40 Has Superb Accuracy!
I know I am somewhat opinionated here, but to me a gun is no fun if it's not accurate. One of the key attributes of the Turbo 40 cartridge that makes it fun is its extraordinary inherent accuracy. Couple that with its superior Ackley-like performance, all out of an AR-15 semi auto platform and you have a recipe for some really great shooting. What more can you ask for?

The term "spacegun" is clearly an appropriate name for this type of AR-15 rifle, but when built up right a spacegun can offer up a lot of highly accurate rapid firepower, whether it is used for high power rifle competition, varmint hunting with fast follow up shots, tactical matches, or other applications.


Since I am a high power shooter, most of the load and accuracy testing I do is in a slow prone position with a sling and a scope on the rifle. The “x” ring at 100 yards is the size of a dime and on a good day when my pulse is low and I am holding well, it is no problem shooting 10 shot groups all in the “x” ring with an AR-15 chambered in the Turbo 40. It is also fun, at the end of a shooting session at 100 yards, to shoot the staples out of the corners of the targets so that the targets fall on the ground and all I have to do is go down and pick them up. Hitting staples at 100 yards, it can do with relative ease. 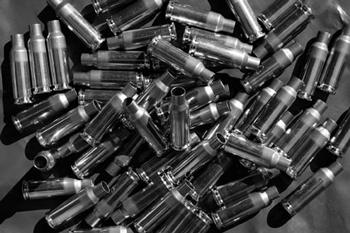 One of the benefits of the 6mm Turbo 40 is the great and plentiful supply of Lapua brass for it. The base brass for the 6mm Turbo 40 is 6.5 Grendel Brass, and making Turbo 40 cases is a snap, just spray the necks with spray lube, run the virgin brass through a Turbo 40 re-size die, load the cases up and shoot them.

The steps needed to make 6mmAR Turbo 40 brass are simple:

1. Take new 6.5 Grendel brass and spray the necks with something like Hornady “One Shot” spray lube;

2. Run them through a Turbo 40 full length sizing die (die sets are available through www.6mmAR.com);

3. Load up the cases and shoot them magazine feed or single loading out of an AR-15 Turbo 40 chambered upper (and with the right powder charge, fire forming loads are very accurate in and of themselves and adequate for competitive and other types of shooting).

There is also no neck turning and no trimming of the brass needed, and in most cases the brass never needs to be trimmed over the life of the cases (10 reloads or so) since brass growth, because of the sharper 40 degree shoulder angle, stays at a minimum. 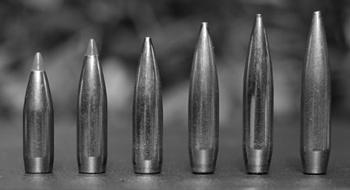 
Feeds and Functions 100% From An AR-15
One of the big questions I had when I developed the Turbo 40 cartridge was whether it would feed out of an AR-15 with a 40 degree shoulder angle. What I quickly found out after making the first prototype upper for the cartridge and shooting it a while was that in an AR-15, the shoulder of the case normally does not make contact with the feed ramp so as to guide the loaded cartridge into the chamber. What typically makes contact (if anything) is the corner edge of the shoulder (at the junction of the shoulder and case wall) of the case, which suggests one could make the shoulder angle even 45 or 50 degrees without issue (but I am not going there – at least for now).

The reality is, I found that if you follow some simple rules (that apply to all AR-15 cartridges) the feeding and function of Turbo 40 cartridges in an AR-15 is the same as it is with other AR-15 cartridges.

Basic Rules For Reloading For AR-15's (.223 Rem, 6mmAR, Turbo 40, etc.)
After working with AR-15 for many years, and especially with wildcats, there are a few rules for reloading (of all AR-15 cartridges) to help guarantee flawless feeding and function. These rules are also posted on my website (on the “Info Page” at www.6mmAR.com).

Die sets are readily available for the 6mm Turbo 40, which makes it easy and convenient to get up and running with a Turbo 40.


Rule #1 Generally speaking, when you re-size cases when reloading for an AR-15 you need to leave a margin for error when you resize cases because it's not like a bolt gun where you can manually push down the bolt handle and chamber a round that's a little "fat" or sticky. In addition, an AR-15 extracts fired cases under pressure and the fired and ejected cases can actually be bigger than the chamber they came out of. For these reasons, when re-sizing brass, you need to bump the shoulder of the fired cases between .003" - .005" when resizing. A lot of shooters (particularly bolt gun shooters who are not familiar with semi auto AR-15’s) violate this rule and only bump the shoulder .001" - .0015", figuring they will keep all tolerances very close, hoping for better accuracy, only to find out they will get rounds that will not chamber properly and will jam in the gun. 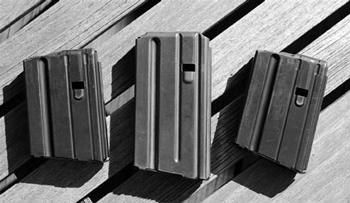 Rule #3 Bullet tips vary, even in the same lot of bullets, so it is always advisable to leave a margin for error when you determine the OAL for loading bullets at maximum magazine length. If a cartridge is binding up in the magazine because you loaded it too long for it to freely move up and through a magazine, you are going to have feeding problems.

The above rules apply to not only the Turbo 40 cartridge in an AR-15, but all other AR-15 cartridges.

Die Sets and Magazines Are Available
Plain and simple, with a semi automatic AR-15, it is easy to shoot off a lot of rounds (magazine feeding, all you have to do is keep squeezing the trigger). From this perspective two other things are also required to run a successful wildcat out of an AR-15:

1. There needs to be die sets that are easy to use and readily available. In this case Hornady Mfg. “stepped up to the plate” and made die sets for the cartridge; and

2. There needs to be good reliable magazines that will feed the cartridge out of an AR-15. In this case, the commercially available magazines for the 6.5 Grendel are the “plug and play” solution. 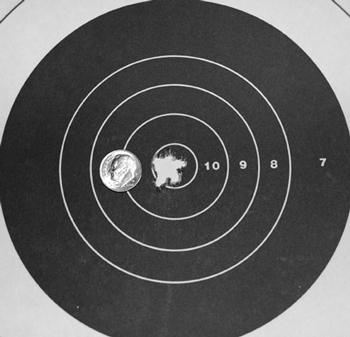 The Turbo 40 For Varminting, Competition and Fun Shooting – What's Not To Like?
While the Turbo 40 cartridge started out as a means for high power shooters to gain a competitive advantage particularly at longer ranges and in windy conditions, what quickly happened is varmint hunters and long range shooters (fun shooting, tactical matches, etc.) quickly picked it up for the same reasons high-power shooters did - it offers “big gun” performance with 6mm bullets out of a smaller and more manageable AR-15 semi auto platform. What's not to like about it?