My buddies Heath and Jess and I were on our way out of a large valley in the Chugach mountains after I harvested a 55” bull moose with the 300 RUM that I had built specifically for this moose in this valley. The rifle was built around a Remington 700 bolt action and McMillan stock. My barrel choice was a 27.25 Lilja 12x in NBRSA HV taper. The scoped rifle weighed in at 16.5 pounds with ammo and bipod. After packing this rifle into the high steep country to access this remote valley and back up and over lugging this chunk of steel around, I realized how much my upper body was screaming at me. I decided then and there to do something to lighten this rifle up.

After a brief phone discussion with Mike at ABS barrels I was sold. I paid for it right there over the phone. Mike stated that the turnaround time was typically about 3 months but he said he had one barrel in stock due to a deal that fell through that was exactly what I was looking for and that he could get it to me with in two weeks.

To make a long story short and without going into details, one year later, I finally received my barrel. Now for the good news. Mike threw in a titanium muzzle brake custom built to my exact specifications for free for my trouble. Upon getting her back from my rifle smith, I gave her a good cleaning from the test firings and was amazed that there was absolutely NO copper to be removed.

Day One At The Range

I never judge a rifle based on my first day at the range. There are too many mental distractions and hopes to really concentrate on the task at hand. However, there were 3 groups that showed signs of real promise and with excellent hunting bullets to boot! I was getting really excited. The very first group was right at 1 MOA. A couple of groups later it shot a .75 MOA group. The last group was 0.4 MOA.

Best load tested on day one. 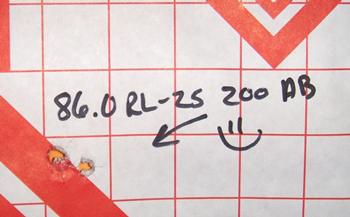 Day Two At The Range

Day two was really exciting. I only fired 2 groups and went home. I only fired two because I shot the lowest charges I had and decided that if they weren’t max loads, they were max enough. The first group was .486” at 100 yards. The second group was .241”. 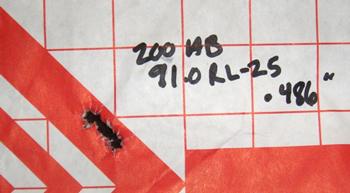 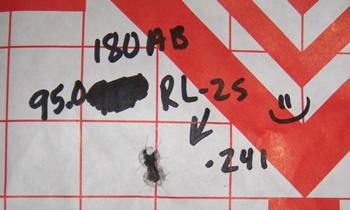 Day Three At The Range

I am not one to settle for high extreme spreads. Later I learned that my case necks were in need of annealing and that RL-25 actually gave me the lowest ES with proper neck tension. Nevertheless, I had to see what H1000 and RETUMBO would do. 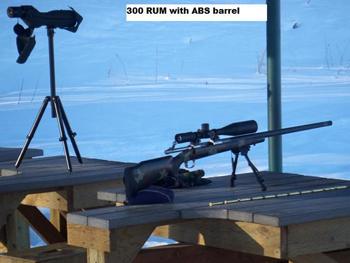 It was now time to re-test the best load. 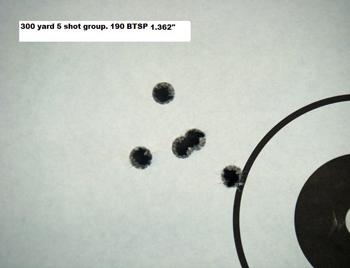 This certainly isn’t the end of my development, but there are enough load notes above to gauge the overall performance of this rifle. It is at about this stage that I feel like something dramatic is wrong. It seems as if my pressures are going up with the same loads from day to day. I start dropping powder charges lower and lower and they still seem hotter and hotter. Also it starts to copper foul really bad. After a total of between 200 and 250 rounds fired, the barrel settles down and pressures and velocity appear to become consistent. 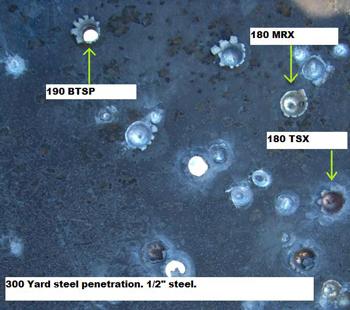 My Worst Fears Are Realized

I took my barrel to a local smith the other day along with the old Lilja barrel I still have that has over 1000 rounds through her. I compared the throat of each side by side as well as several inches up the barrel. To my surprise, the ABS looks almost identical to the Lilja with not even half as many rounds through it. At this point, it become clear as to why it copper fouls so bad now and won’t shoot the same as it did in the beginning with the same loads. I only had between 60-65 shots through it when I noticed the major changes. The throat was somewhat cooke