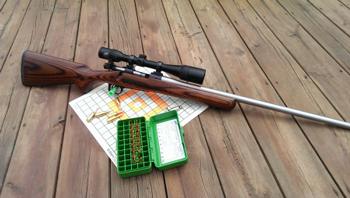 The series of Winchester super short magnum cartridges never really started any fires with the interest of shooters. You can read many threads of why these (223wssm, 243wssm, 25wssm) rounds are undesirable, along with reloading issues and touchy pressure spikes.

I found a very lightly used Winchester model 70 Coyote, chambered in 25wssm. These rifles have a nice look with the laminated stock, matte finished receiver and stainless barrel. This one saw very little use with approximately 80 rounds down the bore. The previous owner claimed ¾” groups with handloads using 100 grain bullets at 100 yards are the best this rifle will print, and doubted tighter groups could be produced.

The price was right and the rifle looked good, so off to the bench for a really good barrel cleaning was first up on the list. Those were some deep blue colored patches that kept getting pushed out of that 24” varmint taper barrel ( I’ll cover some bore cleaning methods in a later writing ). Disassembly revealed good stock bedding, free floated barrel and solid scope mounts with Burris rings.

The factory twist barrel was 1-10, allowing a good selection of bullets, so I picked the 120 grain Winchester “pep” ammo at 3000 fps to check for accuracy. This would be a very good choice for those Michigan deer this fall. I did one small adjustment to the factory trigger after installing a lighter weight sear spring and was able to tune a nice clean breaking 1.5LB trigger pull.

The morning was a mild spring day and I settled the 25wssm in the sand bags, then adjusting a Weaver Grand slam 6-20×40 scope on the 100 yard target, I fired the first three rounds to produce an unimpressive +1” group, which should tighten up once this very clean bore fouls a bit. Taking time between shots with a larger bore diameter helps evaluate groups better while controlling barrel overheating. The next three rounds printed a very nice ½” group that will work well for larger game, and already this average shooting rifle was showing some accuracy potential!
Next page: 25 wssm Coyote >
Reactions: Calvin45