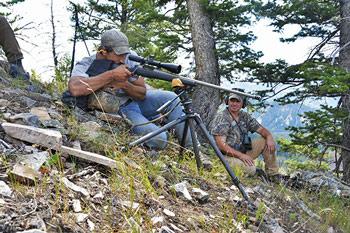 This past August, my dad Len Backus and I, along with Robb Wiley of Non-Typical Outfitters, offered our first long range hunting and shooting class in the mountains of Western Wyoming. The idea for the class was hatched during the many hours Len and Robb spent together hunting mule deer, elk and bear in Robb’s outfitting area, which is one of the very best in the entire state of Wyoming. Before each hunt Robb was in the habit of spending an hour or two giving some instruction to all the hunters in camp on shooting in the uneven terrain of the mountains. Over the years Robb has seen countless situations where very experienced hunters and shooters came out to the mountains on a hunt of a lifetime only to crumble under pressure when a trophy animal presented itself and a quick setup and shot was needed on uneven terrain. The hunters did not have the skills and practice necessary to set up comfortably and confidently and make the shot. Since Robb began giving the limited training before each hunt he has seen his hunters’ success rates increase dramatically. I saw it firsthand this past October on our LRH Group Elk Hunt when several of our hunters used techniques Robb taught to kill their bulls. They had never tried anything like those techniques prior to that little bit of training.

Robb is a very experienced long range shooter and hunter himself and especially loves hunting coyotes and wolves to help control their effects on the game numbers in Wyoming. He has killed thousands of predators over his 20 plus years guiding and hunting in the mountains. He has also personally killed some unbelievable trophy big game animals and works with some of the top Special Forces Units in the country on mountain shooting techniques. He is a true mountain man with an infectious positive attitude and outstanding personality.

Len has been an avid hunter for over 50 years and began long range hunting in the 1990's. With all the experience he has gained over the years, he is a wealth of knowledge on all things long range. Robb found himself constantly picking Len’s brain on their hunts together and learning much more in a short time than he could have during years of reading and watching long range hunting videos. They realized that together they could offer a very unique shooting class experience and began planning for last August’s inaugural class.

Our LRH Shooting Classes take place in one of Non-Typical Outfitters high camps in some of the most beautiful mountains you will ever see. The stunning scenery alone is almost worth the price of admission. Although camp is deep in the mountains, it is easily accessed by car with about an hour of driving off the pavement on forest service roads. Camp consists of comfortable canvas wall tents with wood floors, comfortable cots with thick mattresses and even a hot shower. A generator provides lighting at night and allows us to charge any batteries. A large mess tent is used as a classroom when we aren’t training outside. All meals are provided by an outstanding on-site cook and horses are used to access some unique high-country shooting areas. If you have a future western hunt planned and want to get a feel for what it will be like or just love spending time in the mountains like I do, this camp is the true western mountain experience.

Class began on a Friday morning in early August and ran through Sunday. Some of the students arrived Thursday night while others arrived early Friday morning. We began with a classroom session where we got to know each other and found out the experience level of each student and what some of their goals were along with what rifle, optics, ammunition and equipment they had brought so that we could custom tailor the class to them. Then we presented information about rifle accuracy, optics, calibers, environmentals such as wind, temperature and air density, cant errors, angled shots and many other topics related to effective shooting at extended range. We then moved a few hundred yards from camp to a semi-permanent, super-solid shooting bench where each student’s zero was verified at 100 and 200 yards. A fourth instructor named Jared was brought in at this time. Jared recently retired from the military where he served as a sniper trainer/instructor and now he is an apprentice guide for Non-Typical Outfitters and instructor for our classes. We then worked up dope for those who did not already have it and began to verify out to 500 yards on various steel targets spread across the mountainside across from us. It was lots of fun for the guys to be banging steel out that far by the afternoon of the first day of class! I should also mention that Robb invited several of his other hunting guides to join the class to learn as much as they could and also to help the students. Robb’s guides are as good as hunting guides get in terms of experience and attitude and they were a big help in teaching the class.